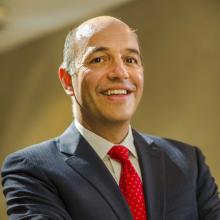 Dean and Professor, University of Maryland Smith School of Business
@SmithSchool
Alex Triantis is dean of the Robert H. Smith School of Business at the University of Maryland. Triantis joined the Smith School in 1995, first as a visiting associate professor, then an associate professor of finance, professor of finance, chair of the finance department and co-founder of the Center for Financial Policy, and now as the eighth dean of the Smith School of Business. Smith is a highly ranked business school with multiple undergraduate, MBA and EMBA rankings in the top 25 of various publications. Smith faculty are consistently ranked in the top 15 by both the Financial Times and Businessweek, and the University of Texas-Dallas ranking of research productivity.
As a highly regarded expert in the area of financial strategy and corporate finance and valuation, Triantis has published numerous articles in leading academic journals, including the Journal of Accounting and Economics, Journal of Finance, Journal of International Economics, Journal of Law and Economics, Management Science, and the Review of Financial Studies, and in practitioner journals such as RISK, Journal of Applied Corporate Finance and Mergers and Acquisitions. His research has been featured in Businessweek, CFO magazine, the Financial Times, the New York Times, the Wall Street Journal and numerous other periodicals. He currently serves on the Editorial Advisory Board of the Journal of Applied Corporate Finance and as a Senior Editor of Production and Operations Management. He has also served as Editor of Financial Management (1999-2005) and Associate Editor of Management Science.
Triantis has consulted and provided executive training in the areas of corporate finance and valuation, including issues related to capital investment decision making, financing strategies, risk management, real options analysis, derivatives pricing, and project finance. Clients have included multinational corporations and organizations such as Airbus Industrie, BHP Billiton, CSX, Dupont, EY, Hyatt, Jefferies and Company, Lockheed Martin, Marriott International, Morgan Stanley, Northrop Grumman, Pricewaterhouse Coopers, U.S. Dept. of Energy, and the World Bank. He is a frequent speaker at domestic and international conferences and executive forums. He has received numerous awards and citations for teaching excellence, including being a two-time recipient of Smith School’s top award (Krowe Award), and being named by Business week as an Outstanding Professor at the University of Wisconsin and the University of Maryland.
Triantis received his Ph.D. from Stanford University in 1988. Prior to joining University of Maryland’s faculty in 1996, he was a visiting scholar at the MIT Sloan School of Management, and an Assistant and Associate Professor at the University of Wisconsin. He served as Chair of the Smith School’s Finance Department from 2006-2011.