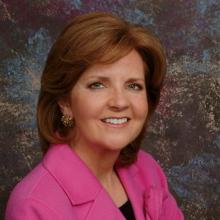 Anne Doyle is a global speaker, author, journalist, business executive, former elected official, mother and change agent who has been on the front lines of women’s progress for nearly five decades. Her book, POWERING UP! How America’s Women Achievers Become Leaders, is a field guide for women who have already “leaned in” and hear the call to leadership.

She began her career as a trailblazing broadcast journalist, covering all the major breakthroughs for women in legal rights, economic opportunity, and cultural attitudes throughout the 1970’s and 80’s. In 1978, she moved to sports, hired by CBS-TV in Detroit as one of the first female TV  sports broadcasters in the nation. For her leadership role in opening sports locker rooms to women reporters, she was inducted into the Michigan Journalism Hall of Fame.

Anne then moved to the auto industry, earning her business credentials as a Ford Motor Company communications and governmental affairs executive. She led the Ford North America Communications team during the Ford Explorer/Firestone Tire crisis and was named by Automotive News to its first-ever list of the “100 Leading Women in the Auto Industry.”

Anne’s portfolio career also includes serving in elected office in Auburn Hills, MI, overseas assignments for the U.S. State Department in the Mideast, Europe and the Caribbean, and speaking and leading workshops at dozens of Fortune 1,000 corporations.

Mother of a 26-year-old son, Anne is president of the MI chapter of the International Women’s Forum, which will host the Global Cornerstone Conference of the IWF in Detroit in October 2020. Her POWERING UP to Leadership! podcast series will launch in spring 2018.