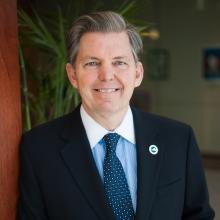 Center for Education and Workforce
President and CEO, Virginia Chamber of Commerce

Barry DuVal was named president and CEO of the Virginia Chamber of Commerce on April 28, 2010.

Under his leadership, the Chamber has become Virginia’s largest business advocacy group, growing from 847 members in 2010 to more than 25,000 members today. With the input of more than 7,000 business leaders, the Chamber has spearheaded Blueprint Virginia – the state’s first comprehensive initiative to provide business leadership, direction and long-term economic development planning for Virginia.

Barry’s public service began in 1988 when he was elected to the Newport News City Council. In 1990 he was elected mayor of the city. He served as mayor from 1990 through 1996, when he stepped down to become the president and CEO of a regional economic development organization representing Southeast Virginia’s 1.6 million citizens.

From 1998 through 2002 Barry served as the Secretary of Commerce and Trade for the Commonwealth of Virginia. During his term as Secretary, Virginia attracted a record-setting 1,500 economic development projects representing 156,850 new jobs and $13.7 billion in private investment.

His private sector experience includes serving as president and CEO of DuVal Associates, Inc, a diversified real estate firm, from 1983-1996. Upon the completion of his term as the Secretary of Commerce and Trade, he served as president and CEO of Kaufman & Canoles Consulting, LLC, an economic development consulting firm specializing in public private partnerships and strategic planning for business and government agencies.