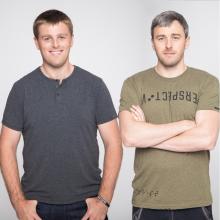 Bradford and Bryan Manning are curing blindness! At a young age, both brothers were affected with Stargardt disease, a form of macular degeneration that destroys central vision over time.  To fight back, they left their former careers in finance to start Two Blind Brothers. Within 1 year, they propelled the small charitable clothing company into one of the fastest growing brands in the country with endorsements from Ellen DeGeneres, Ashton Kutcher, Richard Branson, NBC Nightly News, and many others.

Their luxury clothing project is focused on quality, comfort, and "sense of touch". The clothing is produced by a team of blind and visually-impaired workers in Dallas, Texas. Two Blind Brothers donates 100% of its profits to researchers and the Foundation Fighting Blindness to find cures for blindness. The funds from Two Blind Brothers are driving life-changing treatments that are already being used in patients such as “Voretigene Neparvovec”, a gene therapy developed by Spark Therapeutics.

The brothers are evangelists for charitable and social enterprises. They were recently nominated to the Facebook Small Business Council for their use of social media to empower others and consult on branding, story-telling, corporate responsibility, and sustainable fashion. The brothers have also participated in various public speaking engagements, most notably two TEDx talks since founding the company.

Originally from Charlottesville, Virginia, both brothers graduated from the University of Virginia. Bradford received a degree in finance and Bryan a degree in statistics. Prior to launching Two Blind Brothers in 2016, Bradford worked in investment management and Bryan worked in data sales. They currently live together in New York City.

November 14 (All day) to November 15 (All day)
This form needs Javascript to display, which your browser doesn't support. Sign up here instead