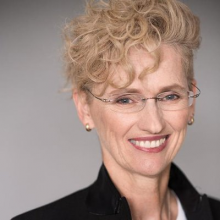 Brenda Andress, also known as the “Thought Leader," is the Founder and President of SheIS. She was also most recently the Commissioner of the Canadian Women’s National Hockey League, a post she held for 12 years, shaping and leading the CWHL’s vision to create the world’s most exceptional women's professional hockey league and a place where women will ultimately earn a living playing the sport at which they excel.

Brenda’s new focus is on growing SheIS, which represents a sisterhood through sports, and a cross-pollination of support for women and girls everywhere. This follows a long career focused on making the sports world a better place. Brenda’s spent two decades in community recreation as the Director of Parks and Recreation, which saw her leadership and vision help communities stay healthy and fit. In 2013, Brenda was recognized with a “Women of Distinction” award by the YWCA, for her work in championing accessibility and diversity in sport. That same year, The Hockey News named Brenda as one of “The Powers of the Future”, in their annual Power and Influence issue. In 2014 she was named the top 100 Award winner as Canada’s Most Powerful Women by WXN and the Canadian Association for the Advancement of Women and Sport, Most Influential Women of 2014 and 2015. In 2018 Hockey News again recognized Brenda for the addition of two Chinese teams into the CWHL and bringing the Canadian Culture of Hockey to China.

Always athletic, Brenda discovered hockey at the tender age of 16 and became the first woman to ever play for a men’s college varsity team, suiting up for Centennial College. Brenda’s love of hockey took her into refereeing the game, ultimately achieving one of the highest rankings, Level 6. Brenda is the author of two books; mother of two wonderful children and grandmother to four equally wonderful grandchildren.