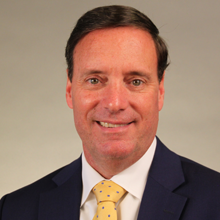 Colonel (Ret.) H. Charles Hodges Jr. is the executive director of Hiring Our Heroes (HOH), a program of the U.S. Chamber of Commerce Foundation. Hodges joined HOH in September 2015 after serving in the U.S. Army for nearly 30 years. He is responsible for planning, resourcing, and executing nearly 100 events each year, throughout the U.S. and on military installations abroad, focused on veteran and military spouse employment. In addition to directing these military transition summits, sports expos, and military spouse and wounded veteran and caregiver career events, Hodges oversees the Corporate Fellowship Program at more than 15 locations.

Before joining HOH, he was the commander of Joint Base Lewis McChord (2012–2015) in Washington state, where he ran what was described as “the most innovative Transition Services Program in the Department of Defense.” This program supported nearly 8,000 service members and spouses transitioning out of the military each year. The program is credited with embracing the 2012 Veterans Opportunity to Work Act and creating numerous Career Skills Programs, which are being implemented across the nation.

Hodges’ military career began in 1985 when he enlisted in the Florida National Guard. After graduating college in 1988, he was commissioned as an Infantry Officer and assigned to Fort Benning, where he completed the Infantry Officer Basic Course as well as Airborne and Ranger schools. Following completion of his training he was assigned to Germany. There, he participated in Operation Desert Shield and Desert Storm from 1990 to 1991. Hodges was next assigned to the Republic of Korea to command A Company, 1st Battalion, 503rd Infantry, followed by an assignment to command Company H, 3rd U.S. Infantry (The Old Guard) in Arlington, Virginia. Subsequently, he attended graduate school at American University and was assigned as a Military Fellow at Edelman Public Relations, followed by an assignment as chief, media relations for the Military District of Washington.

In 2002, Hodges was assigned to Fort Lewis, serving for three years in the 3-2 Stryker Brigade Combat Team, where he was part of the team that certified the Brigade and deployed as part of Operation Iraqi Freedom from 2003 to 2004.

After returning from deployment, he was selected to serve as the chair of the Military Science Department at Duke University. In 2007, he returned to Fort Lewis and took command of 1st Battalion, 23rd Infantry, 3-2 Stryker Brigade Combat Team. Hodges commanded for three years, including a deployment to participate in Operation Iraqi Freedom from 2009 to 2010.  After attending the U.S. Army War College, he took command of Joint Base Lewis-McChord in August of 2012.