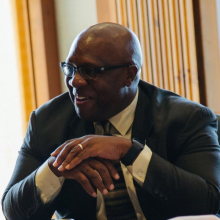 CHARLES REDDING has served as CEO and President of MedShare International, Inc. since 2014. From 2012 until 2014 he served as Chief Operating Officer, leading efforts to expand to a third region in the Northeast with a Sorting and Collection Center in Secaucus, New Jersey.

Under Charles’ leadership MedShare has experienced record-breaking years of humanitarian aid shipments, programmatic interventions, fundraising and community outreach. His strategic shift from outputs and a relentless focus on measurable outcomes and impact are recognized as major contributors to the organization’s expanded success. His leadership in responding to the 2014 Ebola Virus outbreak in West Africa garnered recognition and accolades.

Charles honed his global leadership skills at Johnson & Johnson from 1988 until 2011. As Vice President of Global Operations for the Aesthetic Medicine Business (Mentor), based in Santa Barbara, California, his responsibilities encompassed 1,200 employees in the U.S., France, The Netherlands, and Mauritius with an operating budget in excess of $200 million.

Early roles with the multi-national medical devices, pharmaceutical and consumer goods manufacturing company included serving as the first Plant Manager for Ethicon, Inc. (J&J) in Juarez, Mexico. While based in Shanghai, China he served as Director of Asia Pacific Operation, managing medical device manufacturing facilities in China and India. His work abroad informed his recognition of global health and human services deficiencies.

A successful transition to non-profit leadership is reflected in MedShare’s 4-Star rating by Charity Navigator and the Platinum Seal of Transparency received from GuideStar. MedShare is also a member of the Partnership for Quality Medical Donations (PQMD), Georgia Global Health Alliance (GGHA), and the Medical Surplus Recovery Alliance (MSA) with Charles serving on the boards of PQMD and GGHA.

At Georgia Tech Scheller College of Business, Charles is an Advisory Board Member of the Ray C. Anderson Center for Sustainable Business and serves as a guest lecturer. He is a frequent speaker to civic organizations and presenter at industry events.

A native of Atlanta, Georgia, he holds a BS Degree in Chemical Engineering from Georgia Tech and a certificate in Team Management from the Daniel School of Management at the University of South Carolina. He resides in the city with his wife of thirty years and his son. He enjoys reading, sports, teaching, mentoring, and developing people.