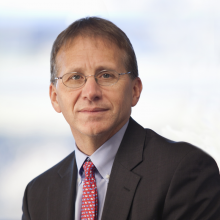 He has been with the company since May of 1994. He joined East Penn as the Controller and has held numerous financial positions including Chief Financial Officer.

Prior to joining East Penn, Chris was a CPA at Ernst & Young for ten years holding the position of a Senior Manager in the Audit division. While working at Ernst & Young, he earned his Certified Public Accountant designation. Chris earned a B.S.B.A degree in accounting from Shippensburg University in 1984.
Chris currently serves on several Industry Boards: Battery Council International (BCI), Automotive Aftermarket Suppliers Association (AASA), and the University of the Aftermarket Foundation.

This past year, Chris participated in the Alvernia University Executive in Residence Program. This program enables business students to glean valuable insight into real-world experiences from regional corporate executives.

In December of 2016, Chris received the Eugene L. Shirk award for Community Builder. This annual Community award is given by Berks Community Television.

In 2013, he was named CFO of the year by the Lehigh Valley Business Journal.

In March 2011, Chris received the Wilburn H. Doran award in recognition of his outstanding work with the United Way and in the Berks County Community.