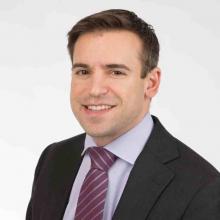 Chrysovalantis P. Kefalas, Esq., serves as vice president of brand strategy for the National Association of Manufacturers (NAM), the nation’s largest industrial trade association. In this role, Mr. Kefalas leads the NAM’s message development, serves as chief speechwriter and oversees the executive communications, marketing and creative services teams charged with helping to tell the manufacturing story in the United States.

In 2016, Mr. Kefalas ran for the U.S. Senate, during a brief leave from the NAM, and earned the endorsement of The Baltimore Sun. “The retirement of Sen. Barbara Mikulski at a time when Maryland voters are rallying around Republican Gov. Larry Hogan gives the state’s minority party the best chance it has had in a generation to capture one of the state’s two U.S. Senate seats,” The Baltimore Sun Editorial Board wrote. It concluded, “When Republican primary voters go to the polls …, they should pick the candidate not only best positioned to take advantage of that opportunity but also to serve the state with distinction in Washington, and that is attorney Chrys Kefalas.” Before joining the NAM, Mr. Kefalas served as deputy speechwriter to Attorney General Eric H. Holder, Jr., a trial and appellate attorney at the U.S. Department of Justice, a business litigator in Maryland, deputy legal counsel to Maryland Governor Robert L. Ehrlich, Jr. and founder and an owner of a sports news firm.

With his state appointment in 2004, Mr. Kefalas became the youngest attorney to serve as a counsel to the governor in Maryland history. In 2007, Smart CEO magazine recognized him as one of Maryland’s Legal Elite.

Mr. Kefalas has appeared on Fox News and he has testified before state and federal legislative committees. His own written commentary has appeared in The Washington Post, The Chicago Tribune, The Huffington Post, The Baltimore Sun and The Hill, and his other writings for principals have appeared in The Wall Street Journal, The New York Times, USA Today, Politico and in other notable international, national, regional and state newspapers.

He is a graduate of Loyola University Maryland and the University of Baltimore School of Law.