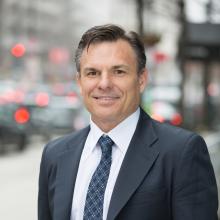 Ed Keturakis brings over 25 years of work in agribusiness and natural resource management to CNFA. As Vice President of Program Development, he leads the strategic direction and design of our private-sector driven agricultural development programs.

Before joining CNFA, Mr. Keturakis was a Senior Agribusiness Specialist within the Global Practice for Trade & Competitiveness at the International Finance Corporation (IFC), part of the World Bank Group. At the IFC, he worked closely with Ministries of Agriculture and Commerce in over 20 Asian and African countries to implement smart enabling environment reforms for agribusiness. Specifically, Mr. Keturakis led regulatory reforms governing the poultry and dairy sub-sectors in Ethiopia, Tanzania, and Nigeria; wrote agribusiness competitiveness policy for the countries of Bhutan and Afghanistan; and served as an advisor for the IFC’s “Enabling the Business of Agriculture” (EBA) global knowledge product. Prior to this, he contributed to business development at Abt Associates, resulting in over $100 million in new funding in the economic growth portfolio.

Throughout his career, Mr. Keturakis has managed USAID-funded projects and advised on the development of agribusinesses throughout Africa and Asia as a consultant. He has experience as an agribusiness entrepreneur, co-owning a small processed food export and marketing company, which had factories in Turkey and distribution in the USA; and as a commercial beekeeper in New Mexico, where he managed a 4000-hive honey production operation.

Mr. Keturakis began his career as an agroforestry volunteer with the U.S. Peace Corps in Niger. He holds a B.A. in biology from Benedictine College, an M.Sc. in Biology from Truman State University, and an M.Sc. in Food Processing Engineering from ENSIA-SIARC (Ecole National Supérieur des Industries Agricoles et Alimentaires – Section Industries Agroalimentaires Régions Chaudes) in France.

Washington, DC
October 10 - 8:30 am to 2:00 pm
This form needs Javascript to display, which your browser doesn't support. Sign up here instead