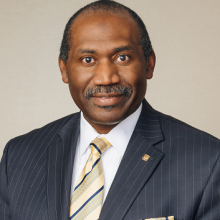 Senior Vice President & Chief Legal Officer, Baptist Memorial Health Care Corporation
Mr. Duckett joined the Baptist Memorial Health Care Corporation in 1992 and is responsible for the day-to-day coordination of all legal matters affecting the organization. Additionally, he is responsible for Risk Management, Corporate Compliance, Privacy and Security, and the Legal and Regulatory Department.
Mr. Duckett served as an assistant to Senator Albert Gore, Jr., from 1985 to 1987 and as Director of Memphis Housing and Community Development for the City of Memphis from 1988 to 1990. He also served as the Chief Administrative Officer for the City of Memphis in 1991.
Mr. Duckett has managed to balance the demands between his family, professional and civic commitments. He currently is serving on the following community boards and initiatives:
State of Tennessee Election Commission (2007 – present)
Riverfront Development Corporation (RDC) Board of Directors. The RDC is a non-profit organization formed by the City of Memphis to develop the parks and surrounding area of the river front in downtown Memphis, TN.
Memphis Chamber of Commerce Foundation Board member (2001 – present)
Member of the Leadership Academy Board of Governors
Fellow in the Memphis Bar Foundation
Board of Directors of the National Civil Rights Museum (1996 – present)
Board Member of the University of Memphis Board of Visitors (2003 - present)
Liberty Bowl Board
MidSouth Fair Board
Memphis Redbirds Foundation
Mr. Duckett has also served on the following boards and committees:
Tennessee Hospital Association, Board of Director, Chairman 2007
Board member of Cadence Bank, N.A. (2005 – 2007)
Board of Trustees of Christian Brothers University (2009 – 2013)
American Health Lawyers Association (2004 – 2010)
Memphis In May Board
Federal Reserve Bank of St. Louis, Board of Directors (2008 – 2014)
Commissioner of the Shelby County Election Commission. (1995 – 2006) Chairman (2003 – 2007)
American Hospital Association, Government Relations Officers Network Council
American Health Lawyers Association (AHLA) Board of Directors. (2003 – 2009)