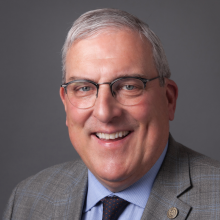 Wade Troxell has been the mayor of his hometown, Fort Collins, Colorado, since 2015. As mayor, he is committed to an innovative approach to a sustainable future impacting the digital economy, energy, water, mobility, and environmental leadership. He fosters a spirit of co-creation, collaboration, and resident engagement for all in the community. As a Malcolm Baldrige 2017 recipient, Fort Collins was recognized by the U.S. DOC for an unceasing drive for radical innovation, thoughtful leadership, and operational excellence.

Mayor Troxell was appointed by U.S. DOT Secretary Chao in 2018 to serve on the FAA Drone Advisory Committee. Previous to serving as mayor, he was twice elected as City Council member serving since 2007.

Dr. Troxell is an ASME Fellow. He has served on the Mechanical Engineering faculty at Colorado State University for 35 years. He is a recognized expert in artificial intelligence and robotics where his research is focused on autonomous systems such as self-driving cars and unmanned aviation vehicles.