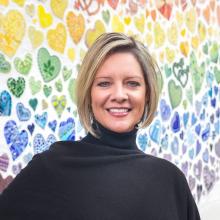 Jennifer Foster is the Founding Executive Director of One Orlando Alliance. Prior to accepting the ED position, Jennifer helped spearhead the formation and program development of One Orlando Alliance and was named Chair of the Board, by coalition members, during the formation process in 2017. She served solely in a volunteer capacity from 2016 until becoming Executive Director in October, 2018.

In June of 2016, Jennifer was appointed by Mayor Buddy Dyer to serve on the OneOrlando Fund board to help provide oversight of the funds donated to assist those directly affected by the Pulse tragedy. Jennifer has also served on the Advisory Council of the Orlando United Assistance Center, a collaboration between The City of Orlando, Orange County Government, and Heart of Florida United Way to connect those affected by the Pulse tragedy to community resources and support long-term recovery in the Orlando community, since inception.

Jennifer is also the Owner/President of Foster Productions, Inc. - a digital media production company located in Orlando with clients around the globe. Over the past 25 years, she has written, produced, and directed projects for many of the most prestigious corporations in the world. Her portfolio includes a wide range of content including Commercial, Documentary, Interactive, Learning Development, Marketing, Animation, and Broadcast media. Foster Productions celebrates 20 years in business in 2019 and Jennifer now chooses to limit her work to projects that she feels makes the world a better place and do not distract from her work with One Orlando Alliance.