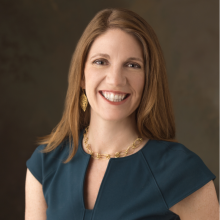 Jennifer Smith is Executive Vice President Technology and Operations, and Chief Information Officer of Zions Bancorporation, a multi-state $67 billion bank holding company. She drives transformative technology and operations initiatives, at enterprise scale, for long term customer and community value. She leads with courage and compassion to create environments of empowerment, belonging, and performance.

Previously, Jennifer served as director of Enterprise Operations where her responsibilities included the Customer Care Centers, as well as all Deposit, Treasury, and Lending Operations. Before joining the Enterprise Technology and Operations team, Jennifer was Zions Bancorporation’s Chief Audit Executive.

Jennifer’s work has been recognized multiple times by various industry organizations. She was named one of the top “40 Business Leaders under 40” by Utah Business magazine in 2010. In 2012, she was recognized as one of the top “30 Business Women to Watch” by Utah Business magazine and was also named an International Women’s Forum leadership fellow. Most recently, she was honored as one of American Banker’s Women to Watch in both 2017 and 2018; and won the Women Tech Council’s Technology Leadership award in 2018.

Jennifer is committed to serving her community.  She is a member of the YWCA of Utah’s Board of Directors and has previously held positions on the United Way of Greater Salt Lake’s board of directors and chair of their Women's Leadership Council. She is a previous Big Brothers/Big Sisters of Utah mentor. In 2011 she received the Women’s Philanthropic Network’s Member of the Year award and United Way’s Heart and Hands award. She enjoys life and work most when connecting ideas, systems, and communities.