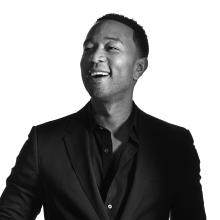 From a young age, Legend has advocated for social change. In an essay competition Legend won at age 15, he wrote of his dream to become a star recording artist and to use his influence and resources to give back to his community. And that is exactly what he has done – throughout his career, Legend has committed his time, energy, and resources to social justice and equality.

For well over a decade, John Legend's philanthropy and advocacy has focused on building just, equitable, and thriving communities. In 2007, Legend started The Show Me Campaign (showmecampaign.org), to give every child access to a quality education as well as address systemic issues in our criminal justice system that disproportionately impact the poor, minorities, and disadvantaged.

In 2014, Legend launched LRNG Innovators in partnership with The National Writing Project and support from The MacArthur Foundation. LRNG Innovators' mission is to empower teachers to redesign learning — connecting students’ passion to purpose — helping the students of today be better prepared for the world of tomorrow. Since inception, LRNG Innovators has invested in more than 30 educator teams across the country who are building tomorrow’s education system today.

Most recently, Legend launched FREEAMERICA (@LetsfreeAmerica), a multi-year culture change campaign focused on ending mass incarceration. FREEAMERICA works to amplify the voices of those impacted by the criminal justice system and those working to change it in an effort to challenge stereotypes, break down barriers, and end the era of mass incarceration.

In addition to Legend’s signature initiatives, he serves on the Board of Directors of Harlem Village Academies and Management Leadership for Tomorrow, and on the Advisory Board for The Quattrone Center for the Fair Administration of Justice at the University of Pennsylvania Law School and Teach for All.

As part of John’s mission to create thriving, just, and equitable communities, Unlocked Futures provides individuals who have been directly impacted by the criminal justice system the opportunity to unlock their potential. In 2017, FREEAMERICA launched Unlocked Futures, an accelerator that provides social entrepreneurs with a grant, tools, mentorship, and strategic support to help grow their businesses. In partnership with New Profit and founding support from Bank of America, we seek to redefine what success looks like, what a business owner looks like, and who a valuable member of a community can be.