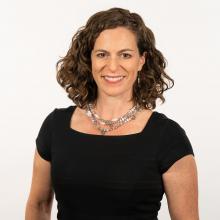 Prior to UPS, Kara worked in both the public and private sectors. She led her own firm, KGR Public Relations, working on communications plans, media strategies, issue advocacy and crisis communications.

In her government roles she served at The White House as President Clinton’s spokesperson; at the U.S. Department of Transportation as press secretary; and while serving as a press secretary at the U.S. General Services Administration, Ross handled media relations and crisis communication in the aftermath of the Oklahoma City bombing.

In the private sector, Kara worked at leading public affairs firms and at Fortune 500 companies and has led teams for technology, aerospace and transportation clients, including Pratt & Whitney, U.S. Chamber of Commerce, Amazon, Association of International Automobile Manufacturers and DynCorp International.

She serves on the U.S. Chamber of Commerce Foundation’s Advisory Board, is a founding co-chair of the Discovery Food Bus program and volunteers for Martha’s Table, a non-profit in Washington, DC.

Kara and her husband Jim live in Arlington, VA and have two children, Alexa and Aedan.