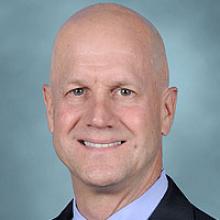 Chief Executive Officer, Cleveland Cavaliers
Len Komoroski is Chief Executive Officer of the Cleveland Cavaliers and Quicken Loans Arena organization. The organization includes the Lake Erie Monsters (AHL), Cleveland Gladiators (AFL), and Canton Charge (NBADL). In addition, he plays a leadership role for business operations and business-related endeavors for Cavs majority owner Dan Gilbert’s family of sports and entertainment interests in Ohio. He is also a principal in Rock Gaming, which operates Horseshoe Casino Cleveland. Most recently, he played a significant leadership role in securing Cleveland as the host city for the 2016 Republican National Convention.
With more than 30 years of experience in pro sports and entertainment, Komoroski’s leadership has helped set a solid business foundation from which the Cleveland Cavaliers, Lake Erie Monsters, Cleveland Gladiators, Canton Charge and Quicken Loans Arena have flourished into one of the most successfully operated sports and entertainment organizations in the country.
Komoroski joined the Cavaliers organization in 2003 as president. In his first year he restructured and transformed how the Cavaliers approached the business community; assembled a team of top sports marketing pros; transformed the organization’s communications efforts; and oversaw the development of one of the most dynamic game experiences in the NBA. Other accomplishments at the helm of the Cavaliers business operations include playing pivotal roles in developing one of the top cable television relationships in the NBA with Fox Sports Ohio, as well as securing the entitlement of the Cavaliers new state-of-the-art player development center - Cleveland Clinic Courts.
The Cavaliers franchise has been repeatedly recognized within the pro sports team industry (NBA, NFL, NHL, MLB and MLS) as one of five finalists for Sports Business Journal’s prestigious “Sports Team of the Year” award in recent years. The award recognizes excellence, creativity and innovation in franchise business operations.
As one of the seven Principles of Rock Gaming, Komoroski played an instrumental role in bringing first-class, full-service casino gaming to downtown Cleveland and Cincinnati along with thousands of jobs and millions of dollars of positive economic impact for local and statewide communities.
Very active as a community and civic leader, he serves on the board of directors of the Greater Cleveland Partnership, the Downtown Cleveland Alliance, the Cleveland State University Foundation, and the Cleveland chapters of the American Red Cross and United Way. He is also Chairman of the Board for Destination Cleveland, Cleveland’s convention and visitor’s bureau. Komoroski was named Sales and Marketing Executives of Cleveland’s (SME) 2013 Business Executive of the Year, and in 2014 received the PRSA John Hill Award for outstanding understanding of and support for communications by an organization's president or chief executive officer.
Prior to joining the Cavaliers organization, Komoroski was the Senior Vice President and Chief of Business Operations with the NFL’s Philadelphia Eagles (1996-2003). There, he played a pivotal role in the Eagles’ growth and business success, which included bringing the Eagles Television Network in-house and helping to broker the record-setting, multi-million dollar naming rights deal for the Eagles training facility, the NovaCare Complex; development of Lincoln Financial Field, the Eagles state-of-the-art stadium and secured a 20-year, $140 million naming rights agreement with Lincoln Financial Group which, at the time, was one of the largest such agreements in pro sports history.
Prior to the Eagles, Komoroski was the Senior Vice President and COO of the International Hockey League’s (IHL) Cleveland Lumberjacks (1994-96). The team was one of three profitable IHL teams in 1996. His first stint in the NBA was with Minnesota Timberwolves as Vice President of Sales (1988-1994), there he played a major role in the start-up of the team and its arena, the Target Center.
Komoroski is a 1982 cum laude graduate of Duquesne University. He and his wife Denise have three daughters – Kristin, Kelly, Jamie and a son, Zachary.