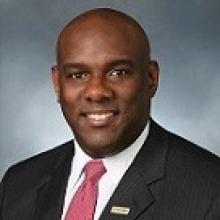 Richard K. Bynum is an accomplished executive with nearly 20 years of executive leadership experience.  He was named regional president of PNC Bank in Greater Washington in early 2017.  Prior to his current role, he was a member of PNC’s retail executive leadership team, where he led the company’s small business division.  In that role, he was responsible for targeting clients across the bank’s footprint with commercial solutions including lending, deposit services, merchant card processing and treasury management services.  Before that, Bynum served as the Greater Washington Retail Market Executive from 2010-2014, where he was responsible for consumer and small business sales within the Greater Washington area, including nearly 200 store locations and more than 1,000 employees.

Bynum started his career with PNC in 2005 in the bank’s Executive Leadership Program.  During that time, he played key roles in launching businesses and initiatives focused on revenue growth, strengthening the brand, increasing the engagement of employees and fostering innovation throughout PNC.

Prior to joining PNC, Bynum had a 12-year career as a senior manager for the American Red Cross.  His last role with the organization was as the managing director for disaster response and emergency communications at the Chicago chapter.  During his career, he was an operations director for the Kosovo Refugee Operation as well as the September 11th effort in New York.

Bynum holds an MBA from the Kellogg School of Management at the Northwestern University and an undergraduate degree in Political Science from Florida State University.  He also is a graduate of the Consumers Bankers Association Graduate School of Retail Bank Management.

Bynum is currently a member of 100 Black Men of Washington DC.  Prior to moving into the area, he served as a board member for the Mattress Factory Art Museum and the Thelma Lovette YMCA branch, both in Pittsburgh, as well as Youth Service Project, a small not-for-profit in Chicago.   He and his wife, Evelyn, live in Springfield, Va., with their two children.