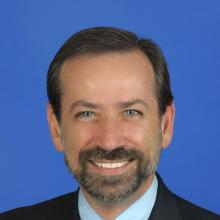 Since January 2014, Ron Gifford has served as CEO of JumpIN for Healthy Kids, a community-wide effort to reduce childhood obesity by ensuring that children and their families have real opportunities to make healthy choices in healthy environments.

Before joining Jump IN, Gifford served for three years as Executive Vice President for Public Policy for the Central Indiana Corporate Partnership (CICP), where he helped lead the organization’s public policy initiatives and the efforts of the Central Indiana Transit Task Force.

Gifford has served on numerous civic and nonprofit boards in various leadership roles, with a particular interest in children’s issues. He is married and has two teenage daughters.