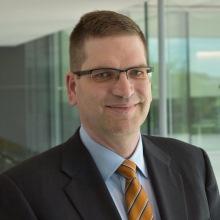 Russ Paulsen is United Way Worldwide’s Vice President of 211, the nationwide program that connects people in need with real people who can help. Russ is responsible for providing overall strategic, operational and business development leadership to the national 211 network, partnering with the leaders of the national system to create the next generation of 211.

Prior to joining United Way, Russ served in a variety of roles with the American Red Cross, most recently leading the development and nationwide roll-out of the largest new program at the Red Cross since the 1970s: a home-fire preparedness campaign that saved nearly 100 lives in its first 18 months. During that time, the coalition of participating agencies educated 500,000 children on fire safety education, created new media campaigns generating 1 million YouTube views in two months and raised more than $15 million in private donations and federal grants.

Russ started his career at the Red Cross in 1989 in the San Francisco Bay Area, serving in both programmatic and fundraising roles. He moved to Red Cross headquarters in 2002 to lead an organizational redesign of the disaster services program and a restructuring of field operations. He was then asked to lead a $216 million long-term recovery program in the aftermath of Hurricane Katrina.