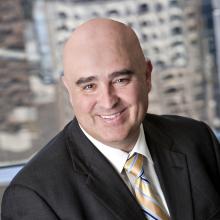 Todd Sanders is the president and CEO of the Greater Phoenix Chamber, Arizona’s largest business organization. Prior to assuming his current role in 2009, he represented the interests of the business community at the State Legislature as Vice President of Public Affairs and Economic Development for the Phoenix Chamber. Prior to joining the Chamber, Todd served as a Policy Analyst for the Arizona House of Representatives in the areas of taxation, environment, political subdivisions and international trade.

He is a native of Bogotá, Colombia, and a graduate of Northern Arizona University with a Bachelor of Science in Political Science. Previous work experience also includes contract work for British Petroleum, South America. Todd serves on the Board of Directors for the several Greater Phoenix organizations, including: Valley of the Sun United Way, Banner Alzheimer’s Foundation, Equality Health, Visit Phoenix, Friends of Public Radio, the Arizona-Mexico Commission, Arizona Town Hall, Arizona Chamber Executives, Western Association of Chamber Executives, Association of Chamber of Commerce Executives, and CALA Alliance.

Todd is married and a proud father. He enjoys travel, politics, and participating in scouting with his son.