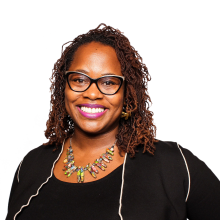 Tulaine Montgomery is an accomplished social entrepreneur, educator, community organizer, fundraiser, and writer. She has played central leadership roles in the launch and expansion of several social enterprises domestically and internationally, focusing her international efforts on East Africa and the Caribbean. She is a Managing Partner and member of the Executive Team at New Profit. A member of the founding team that launched New Profit, Tulaine provides strategic and financial support to many of our nation's most promising social innovations. Tulaine leads New Profit's Inclusive Impact, a comprehensive, sector-wide systems change strategy designed to increase investment and capacity building support for leaders of color. Additionally Tulaine is a member of New Profit's Systems Solutions team and serves as a lead spokesperson for New Profit at a time of growing dialogue in philanthropy about the unprecedented opportunities and challenges facing the sector. She is Host and Executive Producer of "What Had To Be True", New Profit's podcast and online forum for conversations with “America’s Problem Solvers”- the grounded visionaries and practical idealists working hard to make things better.

Prior to her role at United Way, Tulaine served as the National Director of Graduate and Youth Opportunities at YouthBuild USA. Tulaine oversaw a portfolio of initiatives designed to help low-income youth successfully enter college and the 21st century workforce. Tulaine partnered with YouthBuild programs throughout the country to develop an active network of more than 15,000 young leaders and community role models.

Previously, Tulaine was the Manager of the National Schools Initiative (NSI) at Youth Build USA funded by the Bill and Melinda Gates Foundation. Tulaine led the NSI to build a network of over twenty high schools that facilitate college readiness and 21st century skill building for hundreds of young adults (ages 16-24) throughout the United States.

Tulaine served as a founding leader of Citizen Schools, a nationally recognized educational organization serving middle school students across the country. She launched a number of roles at Citizen Schools including Program Director, Chief Training Officer and member of the National Expansion Team. Tulaine worked with Citizen Schools staff and Lesley University faculty to  design the nation’s first Masters Degree in Education with a concentration in Out of School Time. Upon her departure from Citizen Schools, Tulaine was honored with the creation of the “Tulaine Montgomery Village Building Award,” which is given annually to a member of the national Citizen Schools community who leads effective collaborations that strengthen communities and improve the lives of young people.

Tulaine received a master’s degree in Public Policy from Tufts University and earned her B.A. from Smith College in Northampton, MA. She is a Presidio Institute Fellow, Senior Fellow at the Center for Collaborative Leadership at the University of Massachusetts in Boston, a Community Enrichment Fellow at Northeastern University, and a Neighborhood Fellow at Tufts University. She has served as an Adjunct Professor at Lesley University and the Episcopal Divinity School. Tulaine served as the Co-Chair of The State of Black Boston, a comprehensive research and community development initiative that analyzed the social and economic issues affecting Boston’s Black population.

Tulaine has been a featured presenter at numerous conferences speaking on a range of topics including: systems change, education, civil rights, equity and inclusion, philanthropy, community development, social entrepreneurship and leadership. She is featured in “Portraits of Purpose: A Tribute to Leadership” - a visual chronicle and historic narrative of community leaders. (www.portraitsofpurpose.us)

Tulaine is an accomplished cellist and writer; she has written and produced four original plays.