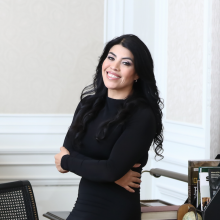 Ximena Hartsock is the Founder and President of Phone2Action, a venture-backed grassroots advocacy and public affairs technology company based in Arlington, Virginia.

Prior to founding Phone2Action she was a member of the executive cabinet of former Washington, D.C. Mayor Adrian Fenty, serving as the Director of the Department of Parks and Recreation, and later as the Chief of Staff for the City Administrator.

Ximena’s company Phone2Action is the leading software platform for civic engagement in the United States. Organizations including the American Heart Association, Lyft, Ben & Jerry’s, Tesla, Airbnb, and many others use Phone2Action to run public policy campaigns and engage with community members.

Phone2Action has won many prestigious technology awards including the SXSW Interactive Accelerator Award and Reed Awards for the past four years. In 2017, Phone2Action was named Most Innovative Technology in Advocacy by Campaigns and Elections magazine. Ximena has received multiple awards for leadership and public service. In 2017 she made the Power 100 list by the Washington Business Journal and she was named a Washington, D.C. Tech Titan by Washingtonian Magazine. Ximena has been featured, among others, in Fortune, Forbes The Washington Post, and the New York Times. Ximena is an education advocate at heart and is proud to have formed a company that builds technology that empowers people to effect change.

She is a member of the Board of Directors of the Washington Economic Club, the Board of Industry Leaders of the Consumer Technology Association, and DC Vote.

A native of Chile, she holds a Doctorate in Administration and Policy from The George Washington University.