The Robots Are Coming - Automated Workforce? 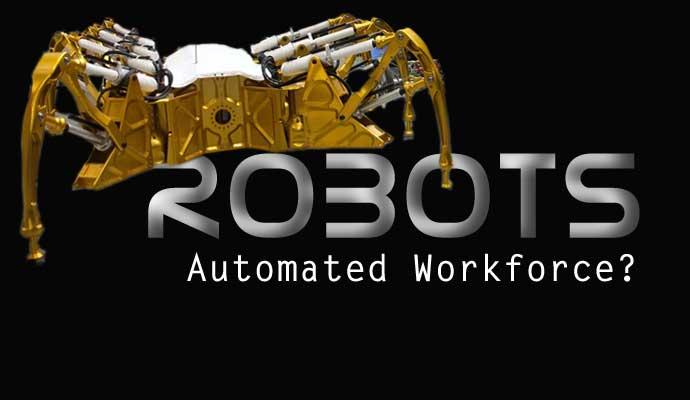 This is part 2 of a multi-part series looking at the impact of robotics on the American economy.

This is the moment that the machines have been waiting for.  The smart ones are getting smarter and the automated ones are being integrated into everyday life.  The better they work, the harder they are to notice.  Just because we expected the Jetsons and ended up with the Roomba doesn’t mean that intelligent machines are any less important to our future reality.

And they won’t stop at just vacuuming your room.  Kevin Kelly predicts that “before the end of this century, 70% of today’s occupations will … be replaced by automation.” 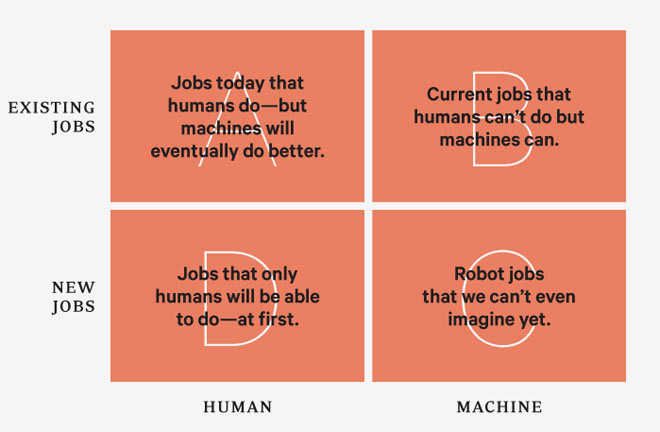 How will robots take over?  Slowly, but relentlessly.  You can see the complete gameplan in the chart above.  Robots will first consolidate gains in industries that are already effectively automated.  Then the tasks marked by repetitiveness and monotony, such as truck driving or bathroom cleaning, will be taken over.  These are jobs that humans can do, but robots can do just as well, if not better.  This category of jobs will only grow in the years ahead.  According to Krugman, we’re moving toward an “intelligent robots world,” where “many tasks are becoming machine friendly.”

While this is going on, white collar industries will come under similar attack, especially the jobs that require dealing with a lot of data and paperwork.  Big Data, referring to the vast collection of complex information residing in cyberspace, enables machines to emulate human understanding and to interpret speech, all things that were once distinctly human. Erik Brynjolfsson and Andrew McAfee believe that “the pace and scale of this encroachment into human skills is relatively recent and has profound economic implications.”  And as Kelly goes on to say, “The rote tasks of any information intensive job can be automated.  It doesn’t matter if you are a doctor, lawyer, architect, reporter or even programmer: The robot takeover will be epic.”

The greatest potential for robots right now is their ability to do jobs that we are unable to do, and in creating new jobs and opportunities to do things we can’t imagine yet.

Part One: "The Robots Are Coming: The Revolution Has Begun"

Part Three: "The Robots Are Coming – Smart Machines and GDP"