Industries That Will Define the 21st Century: Private Spaceflight 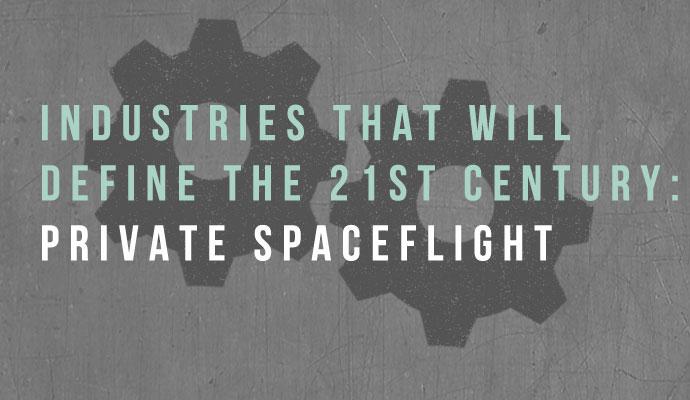 This is part 2 of a series looking at emerging industries.

Today’s emerging technologies let us peek at which applications and solutions will define business in the ensuing decades. Several nascent areas are particularly fascinating; in this post, we take a look at private spaceflight.

In 2010, President Obama proposed that NASA exit the business of flying astronauts from Earth to orbit, opening the door to more companies, entrepreneurs, and enthusiasts. In fact, NASA has contracted space transport company SpaceX to restock the International Space Station.

DARPA, another federal agency, hopes to change the current paradigm of manned flight by funding private companies to create “a completely new type of aircraft.”

Rich investors are also providing funds. Millionaire Dennis Tito, who was the first private space tourist, has proposed to fund the first manned mission to Mars by 2018. While Tito has proposed an aggressive timeline, DARPA has already sparked the dialogue with its 100 Year Starship (100YSS) initiative, which seeks to enable travel to other solar systems by 2112. In both cases, major advancements and inventions will be required across many systems from life-support to ship propulsion to manufacturing.

Outside the United States, China aims to establish a large manned space station by 2020, potentially in cooperation with Europe.

These types of efforts, largely now at the research and prototype stage, will soon coalesce into a new thriving spaceflight industry.

One Shot to Save $2.45 Billion
Election 2020: Our Country Needs a Calm Voice, and Business Can Provide It
Recovery During COVID-19: Tips for Women Returning to Work