U.S. Chamber of Commerce Foundation / Building the 21st Century Workforce
Center for Education and Workforce
May 29, 2013 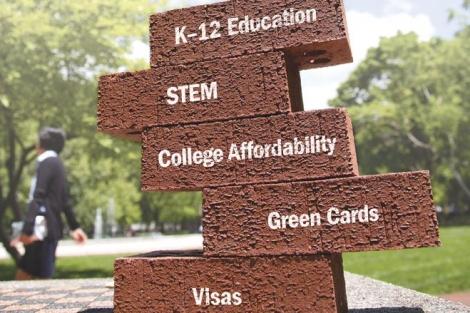 America is in a global race for the future, and it’s falling behind. It’s a race to educate, train, attract, and invest in employees who are able to compete and grow in the 21st century.

Even in a time of chronic high unemployment, many American employers are facing an unexpected challenge—an insufficient supply of skilled and educated workers.

Statistics show that 3.7 million jobs in the United States sit vacant, in part, because businesses simply can’t find qualified workers to fill them. By 2020, employers worldwide could face a shortage of 85 million high- and medium-skilled workers, according to the McKinsey Global Institute in Washington.

The skills gap has multiple causes, starting with the K–12 school system. Two-thirds of fourth- and eighth-grade students are unable to read at grade level, and many are unable to read at all. Thirty percent of U.S. students fail to graduate from high school in four years—and the dropout rate is nearly 50% for African-Americans and Hispanics. Seventy percent of fourth- and eighth-grade students score below grade level in math.

The problem continues when students move on to postsecondary education. Once first in the world, America now ranks 10th in the percentage of young adults with a college degree. The national median graduation rate at America’s public four-year institutions for first-time full-time students is barely higher than 50%. Just 20.5% of students at public two-year schools graduate within four years.

At the same time, the Department of Labor estimates that 90% of the jobs in the fastest-growing sectors of the economy will require some postsecondary education. Who will fill those jobs?

To put Americans back to work, business leaders say that there’s going to have to be an overhaul of the talent development system from top to bottom.

“Businesses can no longer act like having a skilled and educated workforce is just a product of destiny,” says William Green, former chairman and CEO of Accenture, a management consulting, technology services and outsourcing company. “We have to engage and influence the education reform agenda, put skin in the game, and get mentally aligned with what it takes to compete and win in the future.” Green, along with other business leaders, attended a May event at the U.S. Chamber hosted by Ed Rust, an education advocate, State Farm Mutual CEO, and Chamber chairman.

To improve K–12 schools, according to the Chamber’s Institute for a Competitive Workforce (ICW), more robust, comprehensive data must be collected and put to use in guiding the professional development of teachers, making smarter personnel decisions, and targeting areas in need of the greatest improvements.

Additional emphasis must be placed on STEM (science, technology, engineering, and mathematics) education. The U.S. Department of Commerce estimates that STEM jobs will grow by 17% between 2008 and 2018, compared with just 9.8% growth in non-STEM jobs. However, at the current pace, the United States simply will not produce enough workers to fill the jobs.

“We must re-imagine our schools, revise how we recruit and train our teachers, and rethink the stale strategies that have stagnated academic achievement,” says Margaret Spellings, former secretary of education and current president of the U.S. Chamber of Commerce Foundation. “If we do not dare to be bolder in STEM education, we risk losing even more ground globally.”

A new approach on STEM, business leaders say, must take full advantage of strengthened and streamlined academic standards, such as the voluntary Common Core State Standards Initiative being adopted by many states. How teachers are prepared, hired, and deployed, including bringing career professionals into the classroom, must be rethought, and new models of schooling that facilitate STEM learning must be promoted.

ICW and other business groups are calling for more affordable college education, pointing to opportunities to budget more intelligently and ensuring that students graduate with a degree or credential in a timely manner by facilitating credit transfer between institutions and reducing bloated credit hour requirements, among other things.

Employers also want to have more confidence in the value of postsecondary degrees. A recent survey by the Association of American Colleges and Universities found that nearly half of the employers feel that postsecondary institutions need to better prepare students for the workforce.

The current safeguards of quality in higher education—accreditation and the credit hour system—fail to critically examine curriculum content or evaluate how an institution’s academic standards are enforced, business leaders say. Institutions can and should monitor learning gains in a systematic, comparable fashion and provide clear and accurate information on the true costs of their programs and the performance of their students.

Sheryll Poe is Senior Writer for the U.S. Chamber of Commerce.