This story by Early Ed Summit moderator and USA Today Network reporter Swapna Venugopal Ramaswamy expands on one of the topics discussed at the Summit and captures the realities of the need for 24-hour childcare.

DAY CARE FACILITIES WITH OVERNIGHT CARE ARE RARE, BUT THEY DO EXIST. DEE'S TOTS IN NEW ROCHELLE IS A LIFE-CHANGER FOR SOME.

At 7:30 p.m. on a late summer Thursday, Deloris Hogan was hunched over her kitchen counter cutting up freshly harvested cucumbers, strawberries and red bell peppers from her vegetable garden for six young children at her home in New Rochelle. Her husband, Patrick, standing a few feet away, scraped the cheese off four slices of pizza to accommodate a couple of picky eaters.

The children ate their dinner in a room ringed with shelves containing books, art supplies and toys. Soon, the space would be cleared to make way for roll-away beds.

The children were neither related to the Hogans nor were they having a sleepover at a friend’s. They were at Dee’s Tots, a 24-hour family home day care, where some would stay overnight while others would be picked up late at night by their parents.

The facility meets the needs of families with non-standard work schedules — parents working nights, single moms working multiple jobs, emergency workers contending with rotating shifts.These are parents driving delivery trucks and cleaning office buildings, the health aides and emergency workers, the families for whom child care options are few and far between. They are also primarily low-income families of color.

Places like Dee's are lifesavers for these parents, although they are rare.

Nationally, only 8% of center-based providers offer child care during non-standard hours, according to a recent report by Child Care Aware of America. When it comes to evening hours and overnight care, those numbers drop to 2% and 6%, respectively.

Yet, the need is high: About 43% of all children under 18 in the United States have at least one parent who works an irregular schedule, translating to about 31 million children who may need non-standard care, according to CCAA.

Brittney Foster, 26, a single mom, was on a waiting list for months before Dee’s Tots could accommodate her.

Foster, who works a late shift at a residential group home for kids in Dobbs Ferry, takes two buses to drop off her children, Khiley, 8, and Kadyn, 2, at Dee's Tots.

“There's a lot of single parents who can't work if they don't have someone that's available for the flexible hours. Sometimes we are mandated to stay over, so if somebody doesn't come in to cover me, I have to stay overnight,” said Foster, as she arrived to pick her children up around 11 p.m.

“It’s a little scary because you never know where to leave your kids. Especially when they're that small. The older one, she can speak, so it's fine."

When Care Becomes a 'Patchwork'

The state Office of Children and Family Services has a database of all licensed child care facilities in New York state. In Westchester, there are 39 facilities listed as available for "non-traditional hours" (defined as anything outside 6 a.m. to 7 p.m.). However, it doesn’t have a filter for searching overnight care.

A spokesperson for the department sent The Journal News/lohud a list of five facilities approved for 24-hour care in Westchester and one in Rockland.

But of the five facilities in Westchester, only one —  Dee’s Tot’s — is open past 7 p.m. Providers of the other four facilities (in Yonkers, Mount Vernon and Elmsford) say a variety of factors, from difficulty finding workers willing to work the night shift to inadequate demand due to a lack of awareness among parents, keep them from remaining open for 24 hours.

According to a June 2019 report by the Urban Institute, 40 percent of low-income workers whose families participated in safety net programs in the past year reported working a rotating, split or irregular shift schedule, yet "regulated child care during non-standard hours and irregular schedules is nearly nonexistent and, when it is available, can be less affordable than child care during the standard schedule."

The report added, "Families frequently must cobble together patchwork child care coverage, relying on a network of child care providers, friends and family to 'make it work.'"

Foster, who dropped out of high school when she became pregnant at 17, worked a variety of retail jobs while raising her daughter and re-enrolling in high school. After her younger child was born, child care became such an issue that she could no longer afford to work. It became easier to go on welfare than find sustainable child care that would accommodate erratic hours associated with retail jobs.

Foster, who as a teenager was placed by New York City Administration for Children's Services at the Pleasantville Cottage School for a time, said she had always wanted to find work in an area related to criminal justice.

When she found a job at St. Christopher's in Dobbs Ferry, which treats and houses city children, she had to find a way to make late hours she was assigned to work.

READ MORE: The story continues with more on childcare deserts, the billion dollar need, and what overnight care looks like. Read the full story here.

How Childcare Impacts Working Parents and the Local Economy in U.S. States 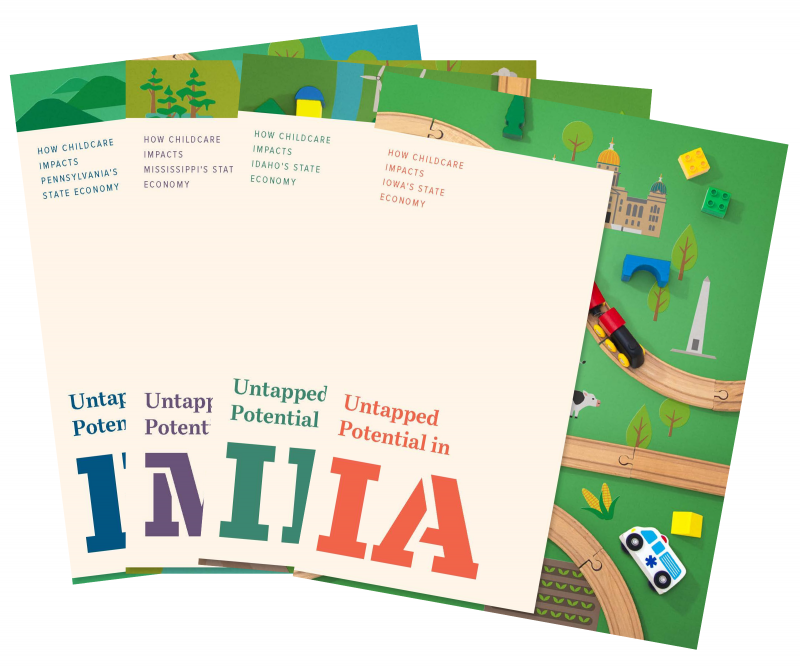