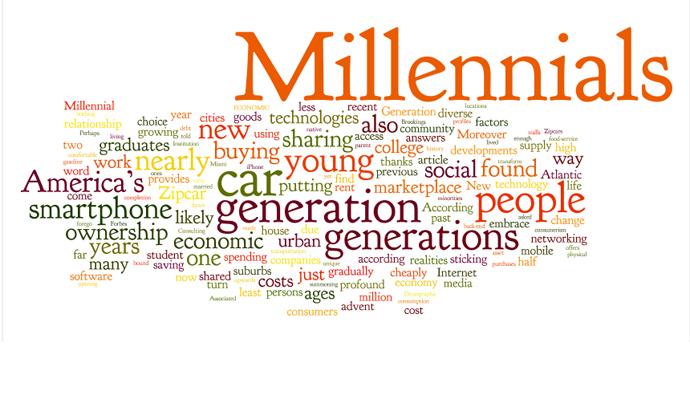 Welcome to the dawn of the “shared economy.”  From Zipcars to bike shares, AirBnB to thredUP, companies are popping up to service the tender dollar of the Millennial generation.  In an article for The Atlantic, authors Derek Thompson and Jordan Weissman describe this new economic reality emerging for Millennials, our “cheapest generation.”  A multitude of factors have conspired to make young people combine their buying power and forego the promise of ownership that inspired previous generations.  These developments include:

Millennials are very different than the generations before them.  They are more diverse, mobile, urban, educated, and, of course, tech savvy.

Millennials, born roughly between the years of 1980 and 1999, are upwards of 80 million strong.  As the Boston Consulting Group found, Millennials will outnumber all other generations by 22 million people by 2030.  They are more diverse than prior generations both ethnically and racially. Indeed, nearly 11% of Millennials have at least one immigrant parent and racial or ethnic minorities account for 39% of the generation.

Moreover, almost 77% of Millennials intend to live in urban areas, according to the Brookings Institution.  Whereas the previous two generations packed up to the suburbs at the first signs of maturity, many of today’s young persons are sticking to urban centers (even those found in the suburbs).  Yet “sticking” might be the wrong word, as one (albeit older) report from the New Strategist found that nearly 30% of Millennials moved locations in just one year from 2005 to 2006.  Note: this means that they are mobile and far away from the malls they once wandered.

Millennials are the most well-educated generation in America’s history.  As the Pew Social Trends study found, nearly 40% of adults ages 18 to 24 were enrolled in college in 2008.  This generation also has the greatest high school completion rate in over two decades (though more could be done), with 72% graduating and 68% of those going onto college.  At present, nearly a third of those under 35 hold an undergraduate degree.  Education has a profound influence on spending and saving habits

Tech savviness is the defining feature of this digitally native generation.  They are the fastest adopters of technology .  Over half of them own smartphones and nearly the same percentage have made purchases using one.  Rather than buying a newspaper or watching commercial-driven television news, you’re just as likely to find young persons consuming information that’s been shared or aggregated on the Internet.  And speaking of sharing, this is the same generation that went from having only 5% using social networking sites to 75% usage in just five years.  Life is lived very publicly and very cheaply on the Internet.

The economic realities for Millennials today are, in a word, ugly.  Over half of those with bachelor’s degrees under the age of 25 are unemployed or underemployed.  According to the Associated Press, they are far more likely to find work as “waiters, waitresses, bartenders and food-service helpers than as engineers, physicists, chemists and mathematicians combined.”   As if that wasn’t bad enough, the average college student graduates with $25,000 in student loans and $5,000 in credit card debt, according to Forbes.

For many young people, these harsh facts have meant putting off buying a house, saving for retirement, getting married or changing jobs.  According to a poll sponsored by Generation Opportunity, “77% of young people ages 18 to 29 either have or will delay a major life change or purchase due to economic factors.”

High gasoline prices are also putting the squeeze on consumers—on top of the $30,000 it costs for the typical new car. These costs weigh most heavily on Millennials.  It doesn’t seem surprising then that urbanized young people are loosening their embrace on America’s car culture.  Some 78% of Millennials told Zipcar in a survey that “car ownership is difficult due to high costs of gas, parking and maintenance,” and 55% of respondents are trying to drive less.

Young people, whether by choice or necessity, are now shifting their spending toward less tangible goods, such as education and healthcare.  Money spent by Millennials on apparel, transportation, food, and more are on the decline relative to past generations when they were at similar ages.  The rest of the difference is taken over by the cost of rent, which has risen by 6% this year (and over 10% in cities like Miami, San Francisco, and Denver).  Though buying a house is a more cost effective choice in 99 of America’s 100 largest cities, home ownership still fell by 12% from 2006 to 2011.

Sharing has gone from hippie to mainstream thanks to the advent of the smartphone, better inventory management software, and social media, which in turn provide ready demand and consistent supply.  Another way of putting it is that technology has enabled peer-to-peer asset sharing and the collaborative consumption that results.

There is nothing really new about sharing.  What is new is the advent of technologies that offer a framework in which this market can function and a way for individual consumers and companies to mitigate the risks that come from sharing their property.

Zipcar provides a good example.  By opening an app on a smartphone, you have immediate access to a large selection of cars that are readily available to you (thanks to software on the back-end that manages Zipcar’s supply of vehicles).  You trust that the car will be there and, if not, you know to turn to Zipcar for answers.

This ease and reliability is rightfully beginning to transform our relationship to assets.  As The Economist asked recently, “Why own a car outright if you can rent or share more cheaply, summoning a nearby vehicle with your smartphone?”  Moreover, as The Atlantic article argues, the smartphone has replaced the car as America’s new status symbol.  Does the “click” of an iPhone bring the same satisfaction of a car roaring to life?  Perhaps not.  But the smartphone offers the access and identity that a car once did.  The car is no longer the only product out there offering mobility.

Shared goods are also gradually assuming validity because a growing community is living out some portion of their lives behind the walled worlds of social media, gradually growing more comfortable with technologies that replace physical divides with digital ones.  Remember that three-quarters of Millennials now boast social networking profiles.  The creation of an online community provides the space, people, and linkages for a marketplace to arise.

Will these trends continue?  Have Millennials ditched consumerism?  Are we instead seeing a temporary blip in an otherwise stable embrace of ownership, brought on simply by the prevailing winds of the economy?

The answers to these questions are as yet unclear.  Any prolonged economic pain is bound to change behaviors and the way those most affected view the world.  With many recent graduates hurting for work, it is well within the realm of possibility that the Millennial generation’s relationship to the marketplace is being permanently changed.  Earnings by recent graduates are likely to stay abnormally low for at least the next 15 years.  Millennials are also unique among past generations in rejecting “work ethic” as a label for their generation.  These and other developments will have profound implications on business and the marketplace for years to come.