U.S. Chamber of Commerce Foundation / 5 States Facing a Skills Gap and What They’re Doing to Beat It 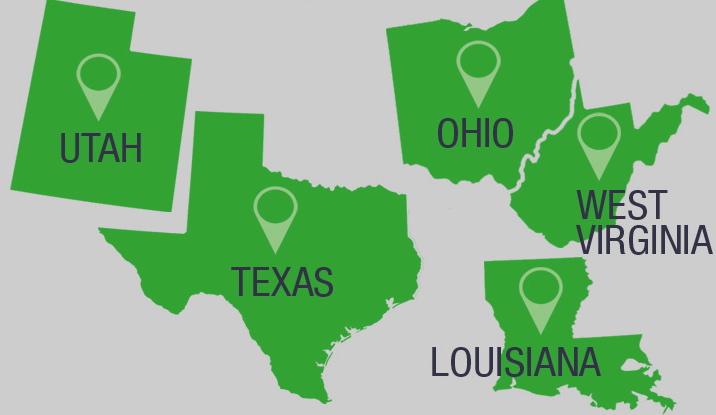 Enterprising states are driving stronger economic growth and job creation despite many anti-business and anti-growth policies coming from the federal government. These states’ pro-growth policies are helping businesses succeed and people get back to work—and they are providing a good model for other state and national leaders on how to advance strong and competitive economies.

This year’s study also delves into how states are dealing with the skills gap, and came to the conclusion that states and their governors play a pivotal role in filling the talent pipeline, providing critical leadership to link businesses with the education system.

In addition, each state has its own economic DNA with varying levels of growth and specialization for its’ individual industries. An energy-related skills gap in Texas or North Dakota, for example, is different from a manufacturing-driven gap in Michigan, aerospace in Washington, information technology in Utah, or the chemical industry in Louisiana.

Below are some Enterprising States examples of states that are on their way towards successfully tackling the skills gap.

Louisiana: Boom-Building on the Bayou

Nowhere is the reality of the back-to-basics economy more vivid than on the Gulf Coast. Overall, in 2011, Louisiana increased capital investment more than any other state. Six of the 20 largest capital investments in the country are tied to oil and gas; the largest, from the South African company Sasol, is located in western Louisiana, and involves a $10 billion gas-to-liquids plant. The 2nd-largest, a liquid natural gas plant, is also located in the state.

At the same time, Nucor Steel is building a plant in St. James Parish, which could see some $3 billion in investment in as many as 1,000 full-time direct jobs. Other sectors, such as food manufacturing, have also gained employment, with several existing producers now in the midst of significant expansions.

To meet the new demand, the New Orleans region boasts numerous highly innovative trade-related schools, such as Delgado Community College and Nunez Technical Institute, two-year colleges with good track records of producing skilled workers in such key areas as nursing, machining, and maintenance. Dr. Monty Sullivan, president of Delgado, which has grown since 2005’s Hurricane Katrina from 12,000 to more than 18,000 in 2013, notes many of his students come from working-class communities around the region. “Two-year colleges are critical to building a middle class,” Sullivan observes. “The difference between $14 an hour and $7 an hour is money for carfare and childcare. It’s a critical difference.”

The high pay of these industrial and other skilled jobs, notes Nunez Chancellor Dr. Thomas Warner, has attracted some students that are graduates of four-year colleges, and whose degrees have not resulted in anything like the opportunities found in trade and technical fields. “People come here to get a job, and they know these kinds of jobs pay well.”

Ohio: Lessons from the Rust Belt

In central Ohio, a significant energy boom has occurred, bringing with it new jobs and expansion of the industrial base. There are already 65,000 wells in Ohio and more are on the way, notes Rhonda Reda, executive director of Ohio Oil and Gas Energy Education Foundation.

This energy boom has powered U.S. Chamber member Ariel Corporation’s business—selling compressors for natural gas wells—and has led Ariel CEO Karen Wright to add more than 300 positions over the past two years. “There’s a huge amount of drilling throughout the Midwest,” Wright suggests. “This is a game changer.”

Today, Wright’s biggest problem is not too little work, but not enough skilled workers. “We have a very skilled workforce,” notes Wright, who employs 1,200 people at three factories in central Ohio, “but they are getting older. I don’t know where we are going to find replacements.”

To meet this demand, many industrial firms such as Wright’s have turned to Central Ohio Technical College, located in the industrial hub of Newark. The college has expanded its training efforts, adding 70 people to its welding program and another 50 for machinist training. Much of the emphasis is on certificate programs designed by companies that contribute to the cost.

This shortfall might sound odd given that the region has suffered bouts of high unemployment for a generation and is just emerging from the worst recession in decades. Yet even in areas with a history of high unemployment, one hears the same concerns: a lack of skilled workers capable of running the country’s increasingly sophisticated and globally competitive factories. Many of these jobs pay well; an experienced machinist at Ariel Corp., for example, earns more than $75,000, a very good wage in an area where a nice single-family house can be bought for less than $150,000.

“There are very few unskilled jobs anymore,” Wright observes. “You can’t make it just pushing a button. These jobs require thinking and ability to act autonomously. But such people are not very thick on the ground.”

The need for precision—particularly in areas involving capital machinery—requires something other than an ability to show up. An operator of a modern CNC (computer numerical control) machine has control of equipment that can cost upwards of $5 million, notes Wright. A new hire in this position must have knowledge of programming, metallurgy, cutting tool technology, geometry, drafting, and engineering.

No region is enjoying more high-wage blue-collar growth—and a potentially greater skill shortage—than Houston. Much of this growth is tied to energy; since 2001, the oil and gas sector has been directly responsible for an increase of 67,000 jobs.

Energy, of course, requires many highly educated professionals—the region now boasts the second-highest per capita population of engineers behind only San Jose/Silicon Valley, and has seen a 24.1% growth in STEM (science-technology-engineering-mathematics related skills) jobs.

But at the same time, Houston has seen a surge of higher-wage mid-skills jobs (usually requiring a certificate or two-year degree) in fields such as manufacturing, logistics, and construction as well as energy. Since 2007, according to the Bureau of Labor Statistics, Houston led 52 major metropolitan areas in the creation of such jobs at 6.6% growth. These jobs also paid more than $100,000 annually.

In the future, Houston’s biggest challenge may not be the lack of university-minted workers—who continue to flock to the city—but finding people in the skilled trades. Already, the petrochemical and construction industries complain about looming shortages. The lack of plumbers, electricians, and other trades is already impacting construction of new housing, offices, and industrial facilities in the region.

“The great thing is we have all these jobs but not the people in the pipelines,” says Marshall Schott, associate vice-chancellor atLone Star College. “Sure, we have need for more geologists and engineers, but by an order of magnitude, we need skilled workers such as welders and machinists.”

The city’s largest community college, Lone Star has increased its enrollment by 58% to 78,000 students in just the past five years, in large part supported by energy, construction, and other local firms. Lone Star predicts it will grow to more than 100,000 students by 2018.

Utah’s economy remained stronger than those of most other states during 2013. According to Utah’s Workforce Research and Analysis Division of the Department of Workforce Services, one major driver of this strength is the state’s robust mixture and diversity of industries. Utah’s economy has been consistently ranked as one of the nation’s most diverse (4th for 2012 data) with manufacturing in the northern Wasatch front, a varied services sector in Salt Lake County, the tech hub in Provo-Orem, mining/oil and gas in the eastern region, and leisure and hospitality in Summit County and in south-southeastern Utah.

Information technology and software is one of the more robust economic sectors in Utah, according to a study by the state’s Workforce Research and Analysis Division. Employment growth in all IT segments grew faster in 2008–2012 than the Utah average, and wages paid are higher than the state average.

Prosperity 2020 is a business-led, multiyear statewide movement to encourage the increase the number of Utahans with postsecondary certificates or degrees, elementary students proficient in reading and math, and high school graduation rates. The movement got a big push from the Utah legislature and the Governor’s Office in 2013:

To identify solutions to this challenge, Tomblin issued an executive order in 2013 that reestablished the West Virginia Workforce Planning Council. The council, made up of education and government workforce policy leaders, will meet to identify and coordinate the state’s resources, while planning a more comprehensive, industry-focused approach to workforce training in the state. It will be required to issue a report each year, giving state lawmakers and the governor valuable information to help shape workforce development policy initiatives.

West Virginia offers companies and individuals access to a number of programs designed to lower barriers to skills training. The Governor’s Guaranteed Workforce program offers a variety of grants to cover workforce training costs, with specific funding available for small businesses and new and expanding businesses. The small business grant program is able to cover up to 75% of the costs of training, and the new and expanding business program can cover up to 100% of qualified costs. West Virginia has also worked with unions in the state to offer access to a variety of apprenticeship programs, offering specific skills training to individuals interested in pursuing a career in the skilled trades.

The state’s Technical Program Development program also supports improved workforce development programming. Offered through the West Virginia Council for Community and Technical College Education, the program awards competitive grants on a quarterly basis to fund the development and implementation of technical training for employers at West Virginia community colleges. Funding lasts for up to three years, but program applicants are asked to create plans for continuing the program after state funding is depleted, providing a sustainable training offering for future use by West Virginia business.

The state’s community and technical colleges also offer funding for training through the Advance Rapid Response Workforce Development Program. This flexible funding is available for a variety of training options, focusing on skills-based training resulting in credentials and transferable skills.

West Virginia University (WVU) also participates in industry support and job creation through its WVU Economic Development Office. WVU works with interested businesses, particularly in technology-related industries, providing academic support and access to research, seeking to support economic growth and diversification. The office also works with economic development organizations around the state that are in need of academic support services.