American Enterprise on Display at Smithsonian 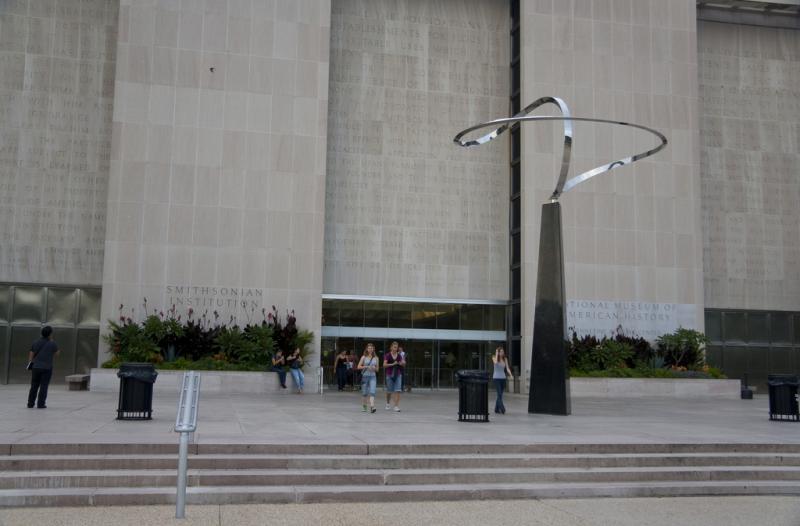 The Smithsonian's National Museum of American History has a new exhibit touting the impact of business and innovation.

“After all, the chief business of the American people is business. They are profoundly concerned with producing, buying, selling, investing and prospering in the world. I am strongly of the opinion that the great majority of people will always find these the moving impulses of our life.”

The above mentioned quote by our 30th President, Calvin Coolidge is from a speech he delivered to American Society of Newspaper Editors on July 17, 1925.  Ninety years later it’s safe to say that a lot can change in a country but every now and then our leaders really do capture the essence of who are as a people and Coolidge’s remarks say a lot about the American experience. Business in its many forms shaped America—from the settlement of Williamsburg, VA; the factories and shipping along the Mississippi River; the farms of the Midwest; and, the railroads, highways and ports that have connected it all together. All were shaped by entrepreneurs of various eras – each of whom embraced the freedom and risk that come from possessing hard fought and won liberty.

When we think about liberty in the United States, we commonly attribute it to the Constitution and Bill of Rights as well as the heroism of those who fought for our independence and the soldiers, sailors, and airmen who have preserved since. Unfortunately what we do not champion enough is the role American enterprise plays in our cherished values of life, liberty and the pursuit of happiness. Indeed, without American enterprise, the United States would not be the country it is today.

A new exhibit by the Smithsonian hopes to change that perception. The “American Enterprise” exhibit at the Smithsonian’s National Museum of American History tells the stories of the businesses and innovations that have shaped U.S., and indeed, global history. The exhibit is housed in the museum’s new “Innovation Wing,” a $63 million 45,000-square-foot addition, that was opened just in time for the nation’s celebration of our 239th Independence Day. Museum director John Gray explained  that, “‘American Enterprise’ chronicles the tumultuous interaction between capitalism and the common good, which is fundamental to understanding our history and our global role.”

While a museum can certainly showcase the innovations of old that changed our country, the real history of business is on display every day in the products and services we use in our lives.  The challenge though for a curator is how do you capture that every day, evolving history and put it into a museum?

Fortunately when you are as world renowned as the Smithsonian, you’ve got some really talented people to help you figure out just how to do it.  For the American Enterprise exhibit, they break its history into  four eras: the Merchant Era (1770s–1850s), the Corporate Era (1860s–1930s), the Consumer Era (1940s– 1970s) and the Global Era (1980s–2010s). Each of them chronicles the ups and downs, and successes and failures of each age but throughout it, the beating pulse of American ingenuity and enterprise can be felt throughout it.

Having some friends who are various museum curators around the country, I’ve heard them each speak about the tough choices of what to put into an exhibit or what not to include.  Even deciding the theme or genre of a particular exhibit is not without its own set of challenges.  For me though this exhibit to could not be more timely or needed. By telling the true story of business and innovation in America with all its beauty marks and blemishes, it helps us to better understand the risk, creativity, reward and difference each era and innovation has brought to our lives.

All too often, the U.S. private sector is lambasted; its success is disparaged or is cited as something to be suspected and controlled and not sufficiently praised as an outgrowth of American ingenuity. Even the Washington Post’s own coverage of the new exhibit showed a decidedly snarky undertone, which to me is a reflection of their own poor understanding (or call it appreciation) of what makes America tick. It’s tough to enjoy liberty without an economy that affords the sort of freedoms we cherish.

For DC residents and the millions of tourists (American and foreign) who visit Washington, DC, every year, the exhibit displays the steady pulse of American innovation and business that has granted an unrivaled way of life, the largest GDP the world has ever seen (currently $16.77 trillion), and an enduring “soft power”—the far-reaching cultural and economic influence that is just as important as America’s military might.

Looking at American enterprise as indistinguishable from American history will teach and inspire generations to come, prompting the next Edison, Ford, Jobs or Gates to innovate and take an admirable risk in the free market. They will lead us to new planets, create life-saving technologies, provide opportunities to change the world, raise the quality of life for all people, and achieve things we cannot even imagine.

The Smithsonian has long been a place where history lovers of all types can learn about glories and imperfections of the American experience.  It now has a worthy section to chronicle our experience with capitalism and the rewards and opportunities it provides to those that partake in it. Regardless of what some detractors may say: we did, in fact, build that. That’s a history worth celebrating and it’s great to be a part of a country that makes history every day.