U.S. Chamber of Commerce Foundation / The Business of Space

The Business of Space 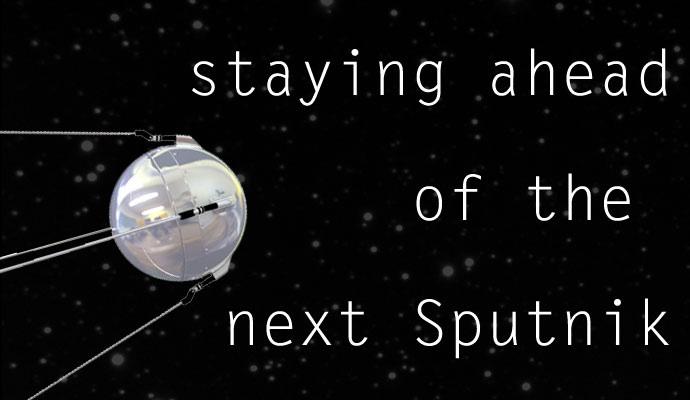 In 1957, the Soviet Union launched Sputnik, the world’s first satellite. Its launch in turn propelled the development of the United States’ own space program. These two countries dominated the space race for decades. Recently, new space programs have been developed by China, Japan, and the European Space Agency, fostering interest in advancing their own space agendas.

Today, there are 60 nations or government consortia operating in space. Deputy Defense Secretary Bill Lynn stated that “ten years ago, the U.S. controlled 65% to 70% of the space market. Today, it has just 35% to 40%.” 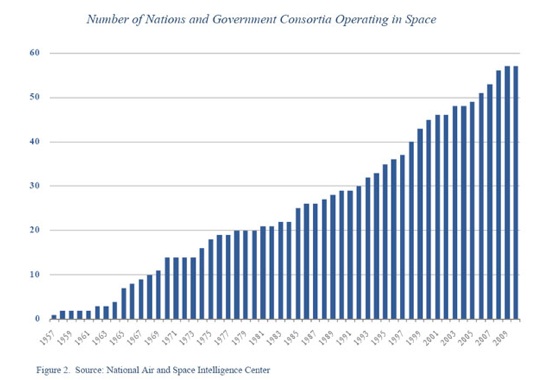 With the retirement of NASA’s Space Shuttle program, the United States is at a disadvantage. We have surrendered the ability for human space exploration and other projects until a new launch vehicle is design and developed. Indeed, the United States now ranks third in launches (after Russia and China).

According to the Aerospace Review, there is rapid rise of economic and geopolitical powers in the space arena. Many of these countries, such as China, Brazil, and India, are geopolitically ambitious and willing to use state power and resources to build sectors considered to have strategic importance (as shown by the chart below). 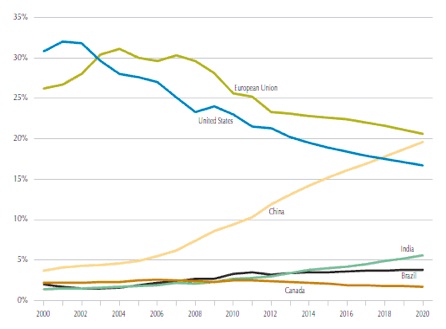 On February 11, 2013, the Forum for Innovation hosted a Business Horizon Series event entitled “Free Enterprise and the Final Frontier” that examined the companies, investors, and entrepreneurial leaders seeking to develop new industries and opportunities in commercial space.

Participants heard from industry leaders in corporations such as Virgin Galactic, Sierra Nevada, and SpaceX; from not-for-profit organizations, such as the Space Foundation; and from various government agencies. The panelists enthusiastically recounted their projects, but agreed that more work was needed to be done by all the stakeholders. They mentioned that more investments and fewer regulations were critical to their future.

One of the key takeaways was the emerging opportunities in the space economy. According to the Space Foundation, the space economy grew by 12% in 2011, reaching $289.77 billion, with most of increases due to commercial rather than government spending. The commercial space sector accounted for 70% of all transactions.

In the United States, approximately 100 companies using spinoff technology from the space industry have been credited with saving 12,000 lives, creating 9,200 jobs, and saving $6.2 billion through innovations.

A second observation is the lack of a national space agenda in America that would enable industry stakeholders to overcome challenges and take advantage of today’s favorable circumstances. These stakeholders know that this market concerns more than just space; it involves a matter of national security. It is about educating Americans in the STEM fields. It is about investing in research and development to spur the innovations needed to fuel the industry and our overall economy. It is about to making America’s space program globally competitive and regaining the top spot that we’ve ceded to others. America cannot afford to wait for another Sputnik moment to decide whether or not it will continue to lag behind other nations in the space race.