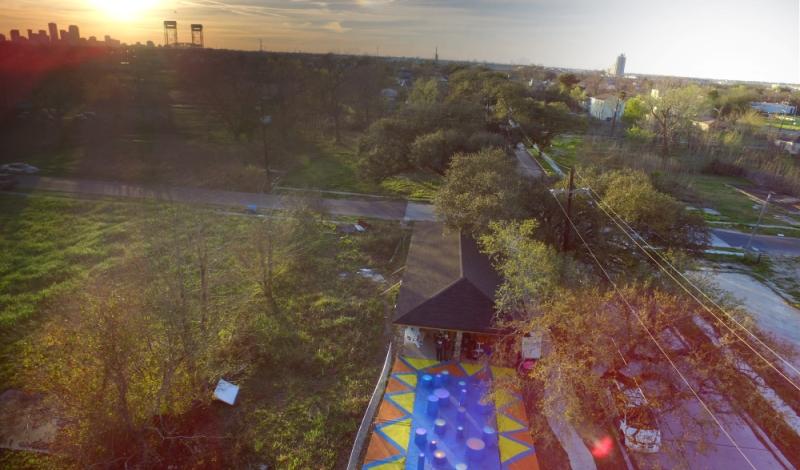 Tweet Facebook
KaBOOM! makes play the easy choice for kids who need it most through creative partnerships.

Devastated by Hurricane Katrina more than a decade ago, much of the Lower Ninth Ward in New Orleans still hasn’t recovered. On many blocks, empty lots and abandoned houses seem to outnumber residents. If you’re a kid looking for a safe place to play in this community, there are few options. But now, thanks to cross-sector partnerships that are reinvigorating urban infrastructure across the country, kids have at least one great place to go: The Hangout.

Next to the neighborhood’s only grocery store and laundromat, a design firm called Urban Conga transformed a vacant lot into an inventive play area. The brightly painted Hangout was once an unlit, empty expanse where people would wait for the region’s only bus line. Now covered in brightly colored murals, it brims with inviting steel cylinders that serve multiple uses as musical instruments, climbing or jumping platforms, chairs or tables, and streetlights. The Hangout is not only a great new place to play but a safe community gathering space, which is rare in the area. The project received funding through the Play Everywhere Challenge, a nationwide competition to bring play to unexpected places. 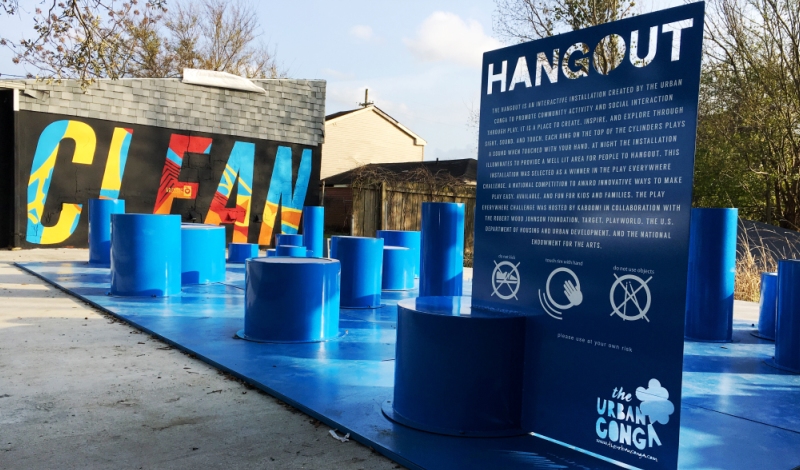 Last year, the national non-profit KaBOOM! launched the Play Everywhere Challenge to encourage cities and communities to reimagine what sidewalks, bus stops, laundromats and other public spaces could look like if they gave kids a way to play there. The goal was to turn potential moments of boredom and frustration into opportunities for creativity and active play.

A groundbreaking public-private partnership fueled the call to action: Target, The Robert Wood Johnson Foundation, Playworld, the Department of Housing and Urban Development, and the National Endowment for the Arts joined KaBOOM! to inspire new design ideas that integrate play into kids’ daily lives. They based the concept on research from the behavioral economics firm ideas42, which suggested that barriers to everyday play stem from lack of access, affordability and inspiration.

To overcome these barriers, the Play Everywhere Challenge motivated communities to install playspaces in easy-to-find places that would prompt kids to “play along the way.” From more than 1,000 applicants, KaBOOM! and its partners awarded a total of $1 million to 50 organizations to create playful spaces that get kids playing more actively and more often.

Following the success of the national challenge, the City of Los Angeles Mayor's Office and Dr Pepper Snapple Group are collaborating with KaBOOM! to introduce Let's Play Everywhere LA, a city-specific version of the competition that will fund the installation of innovative playspace designs in public spaces across LA, especially in underserved communities. And this fall, Target and KaBOOM! will bring the Play Everywhere Challenge to Miami, Dallas, Houston and Atlanta, creating friendly competition among teams in these cities to create playful public space that promotes active play for youth.

The well-being of society starts with the well-being of kids, and play is critical for them to grow up happy, healthy and successful. For too many kids, especially those living in poverty, time and access to play simply aren’t available. For kids in the Lower Ninth Ward – and all across the country – Play Everywhere is emerging as a new solution for cities working to make it easy for kids and families to get the active play they need to thrive.