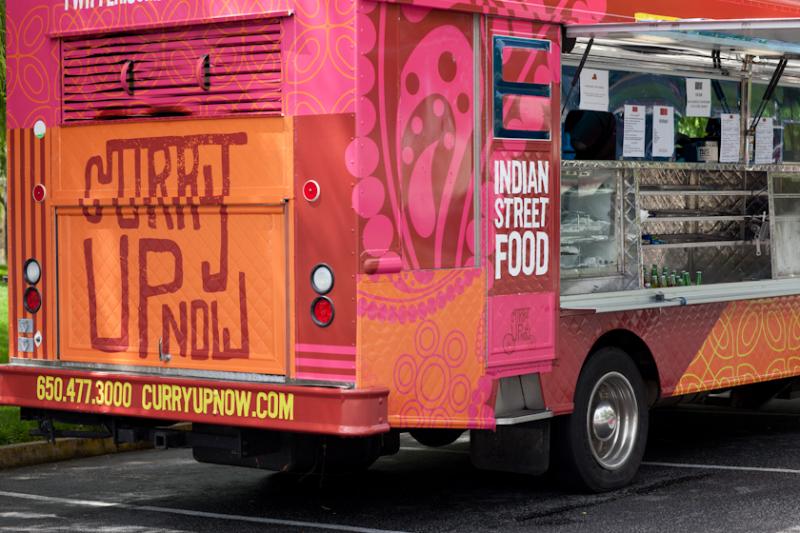 Akash Kapoor, his wife Rana Kapoor and co-founder Amir Hosseini launched Curry Up Now as an Indian food truck in San Francisco in 2009. Their success led to several brick-and-mortar establishments throughout California and they have plans to expand beyond the West Coast with nationwide franchises. Akash opened up to the Foundation about his experiences as an entrepreneur in the food truck industry.

Q: Tell me a bit about your early days in the food truck industry.

A: We started in the summer of 2009. As mortgage guys, we didn’t really know what we were getting into with a food truck. We spent a night testing food items and bought a truck two weeks later. We started out by serving on the weekends and we would have 200 to 300 people waiting for us on the sidewalks. Facebook and Twitter were growing. That was great because we could just tweet a location and customers would be waiting. We went to on to operate 4 days a week and then, 5, 6, 7 days a week and we bought a second truck. Then, we bought another after that and at that point, it became a business. Yet, all this time and expansion and we’ve still kept our food truck identity. We started on the street and that’s very close to our hearts. We aren’t pretending to be a fancy restaurant.

Q: Maybe you’ve read part of our Food Truck Nation report. In it, San Francisco ranks among the five most difficult cities for food trucks. What were some of the challenges you faced and how did you adapt?

Indian food isn’t something that you can cook in a truck. We are cooking dishes like tikka masala and garbanzo beans, which take hours. This was a challenge then and one that we still have today. We can’t cook that on the fly, but we figured out how to streamline the process. We didn’t hire established chefs. Even our cashiers are supposed to be able to make our food.

Q: How has the regulatory environment evolved since you started Curry Up Now?

For trucks, when we started, it was kind of like the wild, wild West. There weren’t too many rules. The cities didn’t know how to regulate us. We helped them through that process. Now, most cities have strict regulations limiting street food vendors, which is a good and bad thing.

In India, most street vendors are on mobile phones for delivery services like UberEats and other Indian delivery services, which is amazing. Someone on their bike or a scooter or a hand-pulled street cart is able to fulfill online orders. We don’t have any regulations about online orders and that part of the business has done very well in recent times for us.

Q: Now being a brick-and-mortar restaurant owner, what do you think of food trucks outside of your shops?

I can’t be a hypocrite. I don’t stop anyone from serving outside of my restaurant. If someone comes to me about a food truck near my restaurant, it’s okay. Now… maybe not an Indian food truck!

A: We are expanding nationally now. In the next five years, we are definitely keeping true to our brand. We are funky, sexy, naughty. That’s who we are.

We are looking to grow our franchises to 500 in 5 years and then 1000 in 10 years. We are going to be an international brand. When someone thinks of Indian food, they should think of Curry Up Now. We want to be the name of Indian food.