U.S. Chamber of Commerce Foundation / The Data-Driven Economy and the Railroad Age
General Foundation
May 15, 2014

The Data-Driven Economy and the Railroad Age 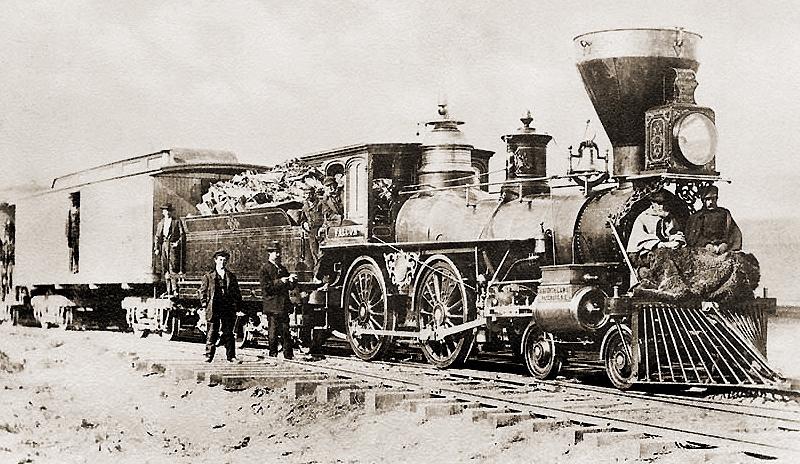 The new technology-driven economy is producing tremendous personal wealth and disrupting entrenched sectors of the economy, encouraging unstable boom and bust cycles of speculation.  A clash between the innate libertarianism of these technologist “upstarts” and the regulatory bureaucracy is imminent.

Enterprise is being transformed. Machines are taking over tasks once reserved for human hands. There are predictions that this will decrease demand for human labor, increasing the disparity between the professional and service classes. Old management hierarchies are giving way to new strategies as fluency in new technologies becomes indispensable.

Engineers, once considered tradesmen by the professional classes, have become “national heroes.”  Those lacking engineering skills fear obsolescence, while the ambitious young strive to imitate the engineering-entrepreneurs defining a new era.

The era I’m describing is not today, but the late 19th century—the height of the Railroad Age—when the United States lurched from an agricultural and mercantile economy into a modern industrial one.

No historical analogy is perfect. But lessons can be learned from studying historical époques similar to ours.  At least three parallels between the Railroad Age and our own Data Age stand out.

First, the railroad-driven economy, like our growing data-driven economy, was not reducible to the new tools it makes possible. Rather it represented a structural shift in the economy, changing social and political life in fundamental ways.

The railroads not only transformed labor, investment, and travel, but also changed the nature of enterprise. The boon for manufacturing was enormous, as energy and transportation costs shrank and agriculture was displaced. But the railroads also changed the way businesses operated, ushering in a new techno-economic paradigm.

With the railroads, scheduling and coordinating time tables with the rest of the country became unavoidable. For this reason, railroad companies were key to the adoption of a national standardized time. As one historian puts it:

Despite all the good scientific and military arguments for world time, it was the railroad companies and not the governments that were the first to institute it. Around 1870, if a traveler from Washington to San Francisco set his watch in every town he passed through, he would set it over two hundred times […] in 1870 there were still about 80 different railroad times in the United States alone.

This was no longer economically viable. So in 1883, a national uniform time was adopted. This made life “flatter” just as the Internet has in our own day.

The modern notion that management  is both a trade and a profession has its roots in Railroad Age too. Railroad companies hired employees specifically for their skills in running things efficiently, cataloguing worker hours and scientifically managing accounts.

Similarly, the data-driven economy we are now entering will transform social and business interactions in ways that we cannot predict. The notion of a universal standard time was not only shocking, but it was also unfathomable prior to fast-paced travel. The ICT revolution has so far made current business practices faster and more efficient. Soon the practices themselves will change, as they did in the era of railroads.

Few at the dawn of the Railroad Age foresaw the role railroad engineers would play in the economy, but nobody predicted the advent of an entirely new bureaucratic infrastructure, which would come to define modern economies and governments. The exciting new data-related developments we see today are, likewise, mere harbingers of greater changes to come.

Second, as in the Railroad Age, it not obvious how new technologies will affect education and employment. Worries that the demand for high-tech skills will not be met, or that older workers will have difficultly adapting, are legitimate, as they were then. But in the late 19th and early 20th centuries, this demand was eventually met, partly because people became educated in the relevant ways but also because the technology receded into the background.

Training everyone today to be data scientists would be akin to training everyone in 1883 to be railroad engineers. This not only misunderstands the limited (though important) role of the railroad engineer, but also fails to anticipate the birth or growth of whole new forms of employment: management, accounting, communications, and infrastructure -- as well as whole sectors fueled by the explosion of new wealth, from the arts and entertainment to education and services. Indeed, many of our leading educational and fine art institutions were the products of the industrial economy of the second half of the 19th century.

Third, as disruptive and innovative as the railroad economy was, eventually, it became the new normal as the techno-economic paradigm was assimilated into the social and economic whole.

The same goes for today. Recent developments, such as the White House report on big data and privacy, or the challenges faced by innovative new companies such as Uber as they negotiate the jungle of urban bureaucracy, reflect familiar growing pains. The magic of Silicon Valley, now the largest and fastest growing part of the U.S. economy, is going mainstream and, as with the railroads, this portends regulatory challenges and conflicts.

The United States of 1889 —an industrial, urbanized, cosmopolitan,  and educated country vying for global dominance—hardly resembled the still new and agriculturally-driven country of 1829. Our own data revolution, only now getting underway, just might put us on track to similarly big changes.