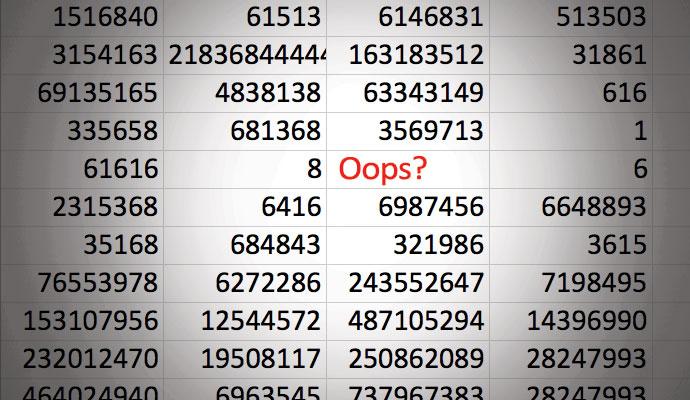 Harvard economists Carmen Reinhart and Kenneth Rogoff (R&R) wrote a profoundly influential paper some 3 years ago finding that a country’s economic growth tumbles when it’s debt-to-GDP ratio passes 90%. That number became a handy rule of thumb to policymakers across the world trying to deal with their country’s rising debt burdens.

Just this week, that influence was broken by three economists from the University of Massachusetts. Thomas Herndon, Michael Ash, and Robert Pollin re-ran the numbers and found a series of Excel errors and some very unusual weighting of country cases (the latter being most important). Rather than finding GDP growth drop from 3% to an average of -0.1% for high debt countries, as R&R did, these authors instead found an average of 2.2% economic growth. As Ryan Avent summarizes, “Whereas the Reinhart-Rogoff work suggests a sudden jolt to growth once debt attains a certain level, Messrs Herndon, Ash and Pollin reckon growth rates merely ease downward.” In other words, high debt loads have nowhere near the impact on growth that we once thought. The firestorm that this finding caused in the economic blogosphere still hasn’t let out. 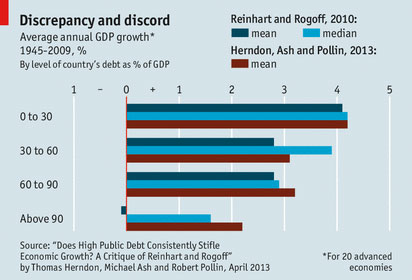 Reinhart and Rogoff have since responded to the controversy, admitting to their Excel errors but seeing their basic point unchanged:

“Do Herndon et al. get dramatically different results on the relatively short post war sample they focus on? Not really. They, too, find lower growth associated with periods when debt is over 90%. Put differently, growth at high debt levels is a little more than half of the growth rate at the lowest levels of debt.”

In the case of the United States, recent experience seems to confirm that the size of our economy and the significance of the dollar as the global reserve currency have given us ample breathing space in our debt load. Moreover, actual publicly held debt stands at 73.6% of GDP, or well under the (soft) threshold set by R&R. Bond market vigilantes have set upon a host of other countries, primarily in Europe. It appears that if a debt tipping point exists for America, we haven’t reached it yet.

Indeed, the authors of the original paper critiquing R&R seem to echo this sentiment in the Financial Times. Similar to Paul Krugman, they believe that their findings should be an encouragement to a degree of higher public spending:

“Government deficit spending, pursued judiciously, remains the single most effective tool we have to fight against the mass unemployment caused by severe recessions. Recent research by Prof. Reinhart and Prof. Rogoff, along with all related arguments by austerity proponents, does nothing to contradict this fundamental point.”

These new findings—and the errors by R&R—shouldn’t be taken too far though. It remains a matter of simple logic that at some point, eventually, public debt eats too far into the private market. At some point, high debt levels slow down economic growth. We just don’t quite know when that point is. To some, that’s a point of comfort; to me, it’s a call for caution on the part of policymakers.

Our knowledge on macroeconomics is far more limited than we realize. The worst criticism should be leveled at public officials who appear to be making policy on abbreviated readings of studies like these. As Justin Fox has written, we’re seeing the “sausage of macroeconomics being made,” and its ugliness should be a warning to decision makers looking to hang their policies on a single piece of research. Wise policy tends to rest in areas where there is ample data and long-standing debate (sufficient to encourage humility, though perhaps that is asking for too much).

There is one thing that we can be fairly certain of though, and it’s the reverse line of causation from what R&R were studying. That is, that what really matters is that low growth leads to high levels of debt. Here’s Matt Yglesias’s take:

“There is an overwhelming theoretical argument that slow real growth will lead to a high debt:GDP ratio and thus whether or not you can construct a dataset showing a correlation between the two tells us absolutely nothing about whether high debt loads lead to small growth. The correct causal inference doesn't rule out causation in the direction Reinhart and Rogoff believe in, but the kind of empirical study they've conducted couldn't possibly establish it.”

In areas as important as debt and economic growth, we need to reach for the highest standards in academic and policy. Debates like these illuminate that need like no other.