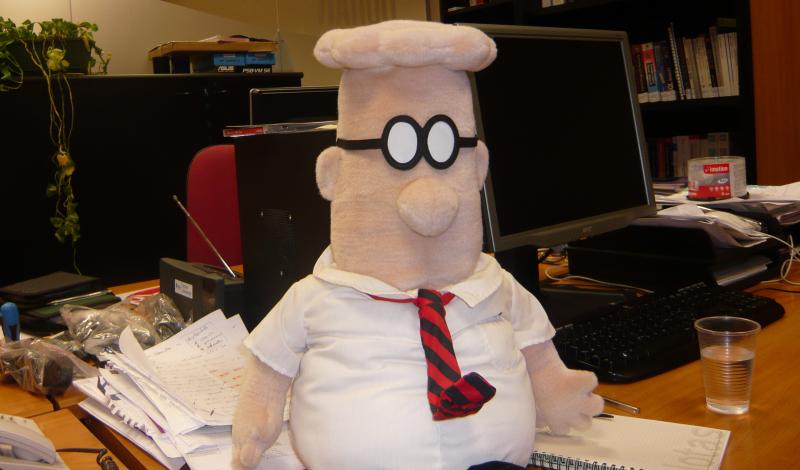 The comic strip Dilbert thrives off of skewering a certain clueless, pointy-haired middle manager who wouldn’t know a Harvard Business Review from People. In one of the best sketches, the manager approaches his secretary to schedule a staff meeting. When asked the topic, he replies with a fusillade of jargon: “I plan to fuse Six Sigma with Lean Methods to eliminate the gap between our strategy and objectives.” At which point the secretary types into the calendar notice “W-A-S-T-E O-F T-I-M-E.”

There’s a lot we could find funny about this comic, but there’s also something painfully true about the amount of waste that comes from poor management. One of academia’s brightest young lights, Nick Bloom, decided to figure out just how much Dilbert-like management costs the world’s major countries in output. His findings in the World Management Survey were, to put it bluntly, alarming.

Bloom and his fellow economies have spent the last decade surveying more than 10,000 managers across 20 countries—mostly Western, plus developing countries like Brazil, China, and India. The firms whose managers they spoke with were randomly selected from the total population of all public and private manufacturing firms with anywhere from 100 to 5,000 employees. The survey itself was ingenious. It measured 18 different management best practices that roughly sorted into categories of monitoring, targeting, and incentivizing performance. Managers were never told they were being surveyed or asked to judge their own abilities. Instead, they were simply being “interviewed about management practices” at a firm they’ve never heard of. These manager’s own management proclivities are revealed in how they judge others. 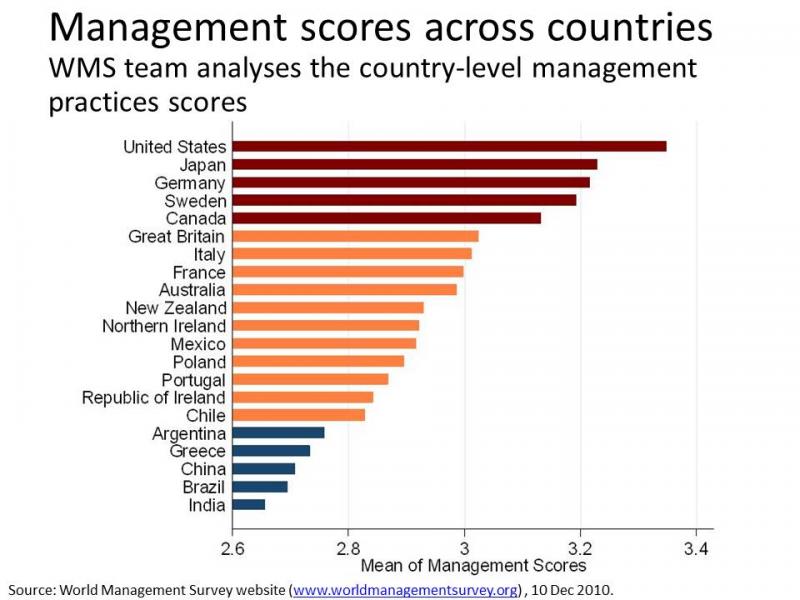 Bloom found that the American firms enjoyed far and away the best management scores. And it’s not just that the score runs high, but that the number of truly “bad” firms is so low. The average American firm’s strong suit is in offering incentives for performance. Other well-performing countries, such as Sweden, were better at offering monitoring and target-based management.

At the other end of the management spectrum are countries such as India, which is at or near the bottom in Bloom’s ranking. Every measure of management suffers in this and other poorly performing countries. But it would be deceiving to see this as an indictment on India’s general management skill. Rather, it’s a sign that the country has a lot of badly run firms that aren’t going anywhere fast.

If you look at the best performing companies within each of these countries, the differences are negligible. A good Greek company is nearly as good as an American company, which in turn is managed as well as the best Swedish firm. It’s really at the bottom end of management that the differences between countries appear. India happens to have a lot of poorly managed firms. The United States does not.

Perhaps unsurprisingly, a country’s productivity is correlated with its management aptitude. Management accounts for a quarter of the productivity advantage America has over Europe. Firms in particular enjoy better performance from good management; as Bloom found, “they are larger, more productive, grow faster, and have higher survival rates.” Success comes quickly to those firms that are managed well.

How can countries improve their management? One way is to better train the managers themselves. Another way is through competition. Force the worst performing companies to do better or simply replace them. In fact, competition, according to Bloom, is the greatest explanation for why some countries enjoy great management and higher productivity and others don’t.

If you recall, countries like India suffer more from a preponderance of poorly run firms that they can’t seem to shake off. These companies don’t wither and die like they would in highly competitive countries. They are coddled in the embrace of large monopolies. Their worst middle managers are impossible to fire. Startups are so caught up in red tape that they have little hope of mounting a challenge to the established players. Foreign competitors are shunned in favor of local cronies. Add all of this up and there seems to be little penalty for the sort of bad management that so weighs down countries in need of prosperity.