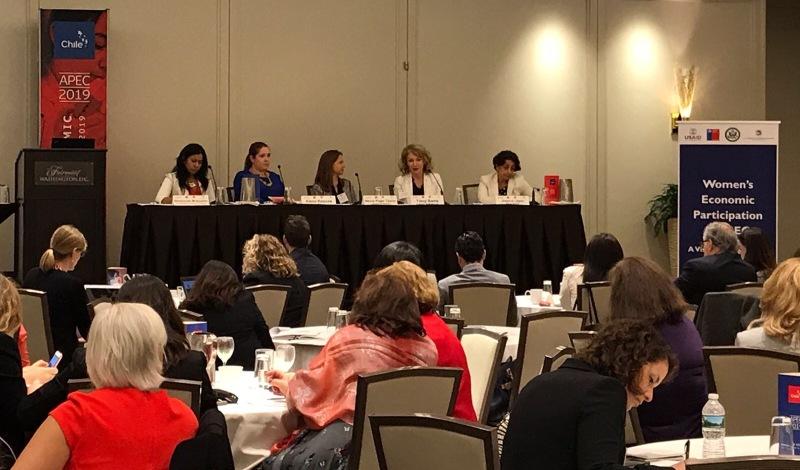 A recent United Nations report states that limits on women’s participation in the workforce across the Asia-Pacific region cost the global economy an estimated $89 billion every year. Inadequate representation of women in the workforce in one of the most dynamic regions of the world also presents a big missed opportunity for individual companies, since large pools of talent remain untapped. This is why the U.S. Chamber of Commerce Foundation and numerous companies within our network have become important partners of the United States government in promoting women’s economic integration throughout the 21 member economies of the Asia Pacific Economic Cooperation (APEC).

Our engagement began last year when we played a key role at the 2016 APEC Women and the Economy Forum in Peru, along with companies like Intel and Deloitte in sharing how Chambers of Commerce and global corporations can support women’s access to jobs, leadership skills, technology, health, and entrepreneurship opportunities. Following up on this dialogue, in July 2017, I also spoke in Santiago, Chile about how Chambers of Commerce can support women’s integration in the economy.

Most recently, on September 14 in Washington D.C., the U.S. Chamber Foundation co-hosted a forum with the U.S. Department of State, USAID, and the Government of Chile (an APEC member who will also be hosting APEC in 2019). At the event (photo above), the U.S. Chamber Foundation, as well as Walmart, Johnson & Johnson, Freeport-McMoran, IFC, and Banco Estado shared strategies with proven success in recruiting, training and promoting women, supporting women in the value chain with capacity building, mentorship resources and access to capital, and providing access to technology, skills, health, and education for women in the community. Through this and other convenings held throughout the year, the U.S. Chamber Foundation and participating companies bring important perspectives to government policymakers and private sector leaders across the 21 economies on how to facilitate greater participation of women in the workforce.

This year’s APEC Women and Economy Forum kicks off in the city of Huế, Vietnam on September 26, where Dell, Inc. and Walmart will be part of the official United States public-private delegation. Dell will be discussing the Dell Women’s Entrepreneur Network (DWEN), a program focused on creating and fostering a community of like-minded women entrepreneurs who are looking for ways to grow by expanding into fast-growth, emerging countries. They will also share information on their program, Men Advocating For Real Change (MARC), an initiative for leaders who are committed to achieving equality in the work place.

Walmart will discuss its Global Women’s Economic Empowerment initiative, through which it has sourced more than $20 billion in products and services from women-owned businesses over the last five years and have trained more than a million women on farms, in factories, and for their first retail job.  They have also worked to enhance the gender diversity of leading suppliers and committed over $100 million in capacity building programs to enhance women’s economic empowerment. They will be contributing their vast knowledge about support for women entrepreneurs to discuss concrete actions that could be taken to enhance the competitiveness and innovation of women-owned businesses.

As an APEC member economy, the United States and the public and private stakeholders within it, recognize that the full potential of women’s contribution to the Asia-Pacific economy remains untapped. As a result, we are working together to support greater inclusion of women in the economies of the APEC region.