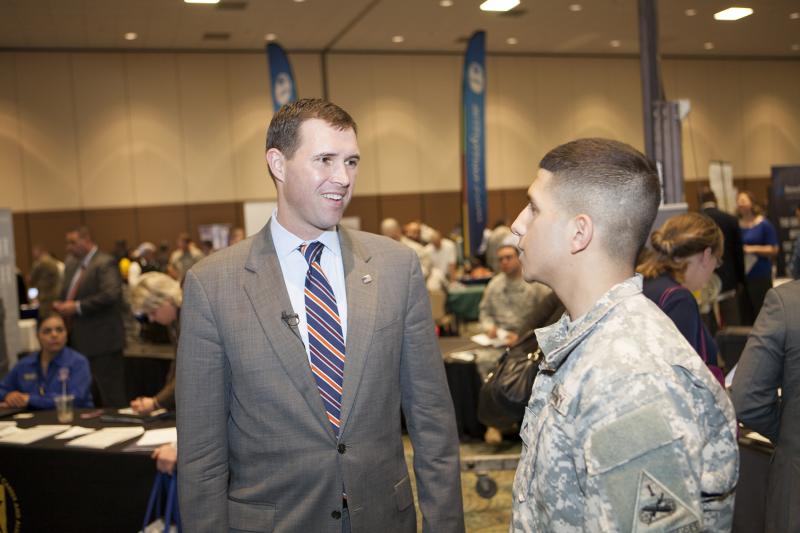 Hiring Our Heroes Executive Director Eric Eversole has been named to the HillVets100 list.

HillVets, a bipartisan organization comprised of service members, veterans, and their supporters, has named Hiring Our Heroes Executive Director Eric Eversole to its first ever “HillVets 100” list.

Eversole was one of several individuals to receive the award in the “Foundations” category, listed alongside other influential foundation leaders who have directly supported veteran involvement in the community, as well as providing funding to raise awareness for veterans-related issues.

Part of HillVets’ stated mission is to focus on “empowerment through networking, community involvement, and education"—tying directly into the role that Hiring Our Heroes plays in helping transitioning service members and their spouses find places of meaningful employment.

As a reserve U.S. Navy officer and member of the JAG Corps since 1998, Eric has experience working with veterans across all branches of service and a keen level of awareness and understanding of the challenges they encounter along their respective paths.

Throughout 2015, Hiring Our Heroes will continue to work with all branches of service and many military-related organizations, as well as important influential leaders in the public and private sector to achieve the goal of finding steady jobs for veterans and their spouses nationwide.

Several of Hiring Our Heroes’ partners were honored as well, including Marillyn Hewson at Lockheed Martin, Josue Robles at USAA, Howard Schultz at Starbucks, Chris Marvin at Got Your 6, and more. Find the Top 100 here: http://hillvets.org/hillvets100/