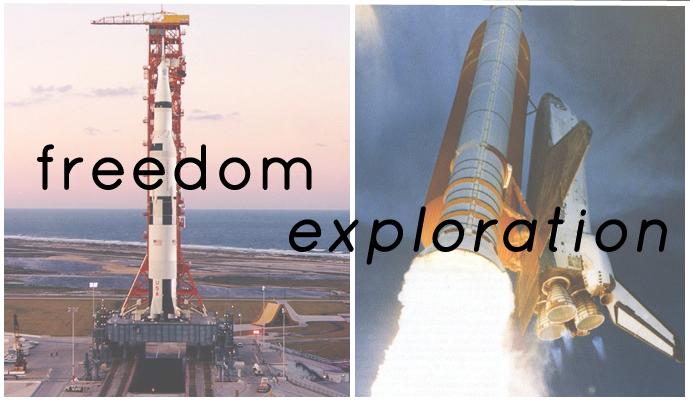 For anyone who is a fan of America’s exploration of space, this is one of those weeks in history that gives us pause. Call it fate or tragic irony, this particular week in late January and early February is when America’s space program suffered the loss of the crews of Apollo 1 and Space Shuttles Challenger and Columbia. Each of these losses were as stunning as they were heartbreaking.

For Apollo 1, it was a flash fire on January 27, 1967, in the command module capsule during a launch test drill that killed its crew of three, including original Mercury 7 astronaut Gus Grissom and America’s first space walker, Ed White.

For Challenger, a ruptured O-ring on a solid rocket booster burned through the Shuttle’s external tank, causing a massive detonation in flight some seventy-three seconds after liftoff on January 28, 1986. Onboard with the crew of seven was Christa McAuliffe, America’s first teacher in space.

For Columbia, her flight and crew of 7 would be lost over the skies of Texas and Louisiana as it was headed towards a final landing at Kennedy Space Center on the morning of February 1, 2003, after completing a nearly flawless two-week science mission. Part of the most diverse spaceflight crew of any in history was Israel’s first astronaut, Col. Ilan Ramon.

Each of those missions and crews were part of unique generations and eras of history. From the turbulent ‘60s, the epic ‘80s and transcendent 2000s, each of their crews showed the incremental evolution that our society has in terms of people as well as risk. In the first era of America’s space program, we were in an all-out race with the Soviet Union to get to the Moon first. The men who were part of that initial astronaut corps came almost exclusively from the military test pilot crowd.

By the time the Space Shuttle era rolled around nearly a decade-and-a-half later, that test pilot crowd found itself with a lot more diversity in terms of race, gender, and backgrounds when it came to wearing space suits and going into orbit. That crew evolution would take even greater steps in the ensuing years with more and more civilian, scientific, and international participation.

Despite their differences in generation, gender, and other demographics, all of these persons had to have the “right stuff, to borrow from the oft-quoted Tom Wolfe book. They all had the smarts, the acumen, and the attitude that made them willing to explore the untried and unknown, even at the risk of the greatest consequences.

That does not mean that they were being overly cavalier or reckless with their lives and those of their crewmates. Rather, it meant that they knew that if they were going to really get somewhere and have that big breakthrough, it was going to require risk at its most extreme circumstances and costs. Everyone one of them knew that, accepted it, and stepped forward voluntarily to do the things that the rest of us have only dreamt about.

Such is the promise and peril with exploration. Sitting on the sidelines may be safe and sound, but it rarely makes history or the breakthroughs that change the world for the better.

Unfortunately, in remembering those historic space exploration crews, we too often dwell on how they were taken from us, rather than the purposes that they served in the lives they lived. For as tragic and preventable each of the accidents were, it was each and every crew member’s acceptance of risk that is part of the larger legacy they left for us to follow. They accepted risk so that they could do more for their country, professions, and fellow humanity.

Failure has consequences and at times the most brutal and painful of them are laid before us. In examining those failings—even tragedies—it is easy and understandable for anyone of us to back away from the riskiest of scenarios. That is part of the human instinct to protect itself from impending harm. Yet there is that other part of our instinct that wants to know more and is willing to step forward into the unknown, to find the who, what, when, where, and how that is out there.

That’s why the notion of having a “freedom to fail” is so powerful. The lessons from not challenging the status quo and the norm around us may leave us safe and sound, but they will never teach us anything new beyond what is already known. By that measure, that’s a life unchallenged and, frankly, a life unlived.

In reflecting on the legacies of these most unique explorers and how they relate to the entrepreneurs of today, it is worth noting the spirit and acceptance of risk that they both share. Nothing good ever come easy or without risk. The lessons of failure can be stark, brutal, and painful, but they also yield lessons that make the next journey more powerful and that much closer to success. That by itself is a metric of lives and legacies well lived.

U.S. Chamber of Commerce Foundation Launches ‘Talent Finance’ Initiative to Develop New Models for Investment in the Workforce of the Future
Talent Finance: A New Consensus and Return-to-Investment
JDX is Taking the Next Big Step in Leveraging Data for a Modern Talent Marketplace