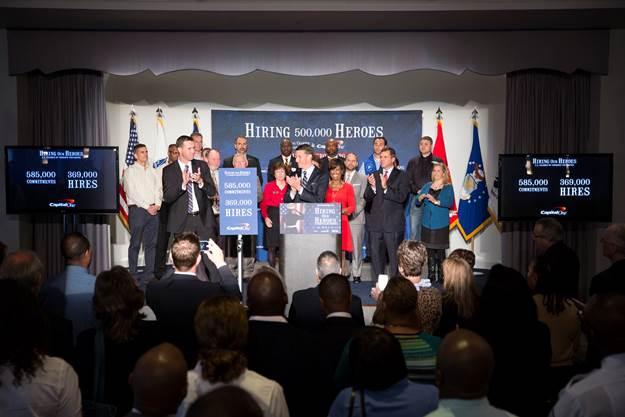 Hiring Our Heroes  and Capital One Financial Corporation have announced a major milestone in their efforts to find employment for veterans and military spouses.

The groups on Wednesday said they have received committments from businesses to hire 585,000 military men and women since launching the Hiring 500,000 Heroes campaign in March of 2012.

“Securing more than half a million employer commitments in such a short timespan was a tall order, but we have been overwhelmed by the enthusiasm we’ve seen from the business community across the country that are stepping up to be a part of this critical mission,” said Eric Eversole, vice president at the U.S. Chamber of Commerce and executive director of Hiring Our Heroes. “Capital One has been a strong partner throughout the process and continues to lead by example – both through their veteran recruitment efforts and the many resources they provide to military employees. Our shared appreciation and respect for that work ethic and the talent our nation’s service members and military spouses bring to the table, keeps us motivated and has allowed us to make a significant impact on veteran employment.”

Hiring Our Heroes and Capital One made the announcement at a job fair at Joint Base Anacostia-Bolling.

The Hiring 500,000 Heroes campaign is a three-year, $4.5 million effort that includes career fairs and training designed to connect potential employers with talented veterans and military spouses.

In addition to facilitating job fairs, a major focus of Hiring Our Heroes is dedicated to helping military men and women successfully translate their military skills and experiences into compelling resumes that reflect their achievements in service. Hiring Our Heroes has hosted more than 800 job fairs for veterans and military spouses.