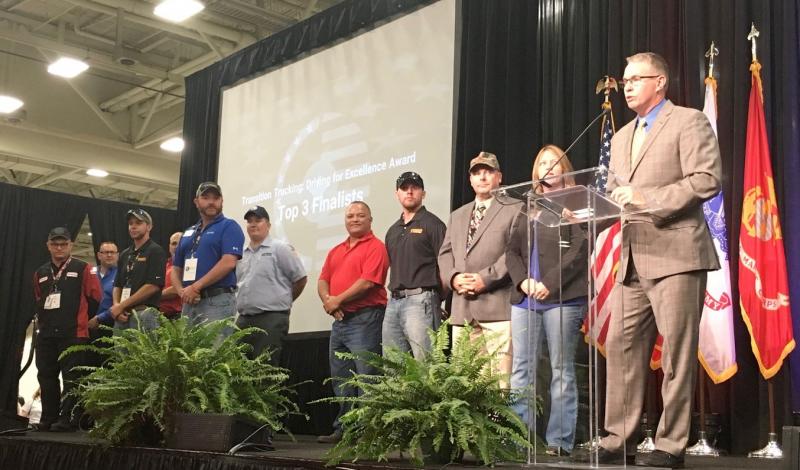 Tweet Facebook
Transition Trucking award to be presented by Hiring Our Heroes, in partnership with Kenworth and FASTPORT.

One hard-working military veteran will drive off in a new Kenworth T680 truck on Friday, as the winner of a “Transition Trucking: Driving for Excellence” award.

The award, presented by Hiring Our Heroes in partnership with Kenworth Trucking and FASTPORT, will recognize the top military veteran rookie driver in America out of a group of nominees from the trucking industry.

The winner will be announced during an event Friday at 10 a.m. at the U.S. Chamber of Commerce in Washington, D.C.  The T680 truck will come fully loaded. The two runners-up will receive $10,000 in prize money.

The “Transition Trucking” award campaign began this past spring, as part of an effort to inspire the trucking industry to hire more veterans, national guard members and reservists. The campaign is an extension of Hiring Our Heroes’ efforts to connect veterans with career opportunities. HOH has a longstanding partnership with FASTPORT to highlight that trucking can be a natural fit for veterans because it is logistically-oriented and skills can transfer smoothly.

Trucking companies from around the country nominated top military veteran rookie drivers for the Transition Trucking competition, based on their job performance.

An independent selection committee comprised of representatives from motor carriers, trade associations and driver training schools selected the finalists. A nationwide vote offered the public to show their support for their favorite finalist.

Here’s a look at the three finalists:

Before joining Werner, Davidson was a jet engine mechanic with the esteemed Blue Angels flight demonstration squadron. He grew up around heavy machinery and said being an over-the-road trucker was a great way to continue serving the country after his military service. Davidson said that if he wins the truck, he would like to become an owner-operator with Werner.

“I think I was chosen for my military background, my attention to detail, my honor, courage and commitment to my job. I love my job and love what I do,” he said.

Hardy joined Trimac after careers in both the Navy and the Army, and said he feels honored to be part of the 1% of Americans that have served. Hardy is a member of Trimac’s Elite Driver team, and said he enjoys trucking because it has supported his family. He praised Trimac for its commitment to veterans.

“If I win, it would be a life-changing experience because I’ve always wanted to be an independent contractor,” Hardy said. “I was chosen by the providence of God and am proud to represent the service and my company.”

After two combat tours in Iraq and some time spent working on oil rigs, Scott joined TMC in 2015 and quickly became one of the company’s top drivers. Scott said he has always wanted to become an owner-operator, so winning a new truck will make that dream a reality.

“This will be a big jump start to that entrepreneurial career,” he said. “It takes patience and dedication to do this job. I strive for perfection, no matter what the task is.”

Watch videos about each finalist here.