Hiring Our Heroes Honors Its Partners at Annual Gala 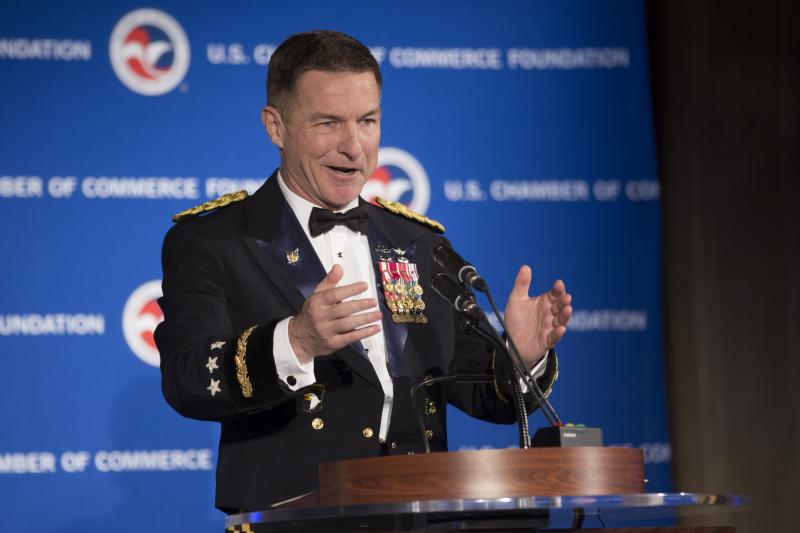 Tweet Facebook
Hiring Our Heroes recognizes six companies and individuals for their support of veterans and military spouses.

The U.S. Chamber of Commerce Foundation’s Hiring Our Heroes held its fifth annual Lee Anderson Awards Dinner on November 10, to recognize and thank the committed partners involved in finding meaningful work for veterans and military spouses.

Hiring Our Heroes handed out six awards to companies and individuals, highlighting the importance of private- and public-sector partnerships in the military hiring community. It also used the evening to talk about the way ahead for the next year.

The U.S. Chamber of Commerce President and CEO Thomas J. Donohue was a featured speaker at the event, where he thanked those present and discussed the important milestones that have been reached by the program in 2015.

“One of the most important ways our nation can honor the service and sacrifice of our military personnel is by ensuring that they have meaningful employment when they transition into civilian life,” Donohue said during his remarks.

Since launching in 2011, Hiring Our Heroes has held more than 950 job fairs for veterans, military spouses, and transitioning service members, resulting in 28,000 hires.

Hiring Our Heroes also partnered in 2012 with Capital One on a campaign to engage the business community in pledging to hire 500,000 veterans and military spouses.  A major milestone was reached this year when HOH and Capital One announced that they reached the 500,000 goal in June.

The work of Hiring Our Heroes is taking on new importance as more than one million service members are expected to transition out of the military in the next five years.

The keynote speaker of the evening was the LTG James McConville, who serves as the Deputy Chief of Staff, G-1,  a position which he has held since August 2014.

“Only 30 percent of officers and 10 percent of enlisted personnel serve more than 20 years,” McConville said.  “This underscores the importance of what we’re doing for transitioning veterans.”

Hiring Our Heroes presented awards in the following categories:

Steve Robinson Post-9/11 Veteran Employment Award—Starbucks received this award for effective and sustained efforts to enhance the ability of post-9/11 veterans and transitioning service members to find meaningful employment in the private sector.

Don Weber Wounded Veteran and Military Caregiver Employment Award—APi Group Inc. received this award for demonstrated leadership in addressing the unique challenges and demands for wounded warriors, spouses, and caregivers in their search for meaningful employment.

Military Spouse Employment and Mentoring Award—Prudential Financial received this award for demonstrated hiring and support of military spouses in their search for meaningful employment in the private sector.

Capital One Award for Small Business Veteran and Military Spouse Employment—Camo2Commerce received this award for demonstrated leadership by a small business or organization (less than 500 employees) in hiring veterans, transitioning service members, and military spouses.

Colonel Michael Endres Leadership Award for Individual Excellence in Veteran Employment—Keith Nattrass, GM Military & Veteran Affairs, Global Diversity, General Motors, received this award for an individual who has gone above and beyond to make a difference in employment opportunities for veterans, transitioning service members, and spouses.

The finalists and recipients for the awards were competitively judged by the Hiring Our Heroes Awards Committee, which based the judging on criteria such as innovative recruiting and retention strategies, military community engagement and leadership, and ongoing commitments to hire veterans, transitioning service members and military spouses.