U.S. Chamber of Commerce Foundation / How Can We Get 40 Percent More Water in 14 Years?
Corporate Citizenship Center
May 19, 2016 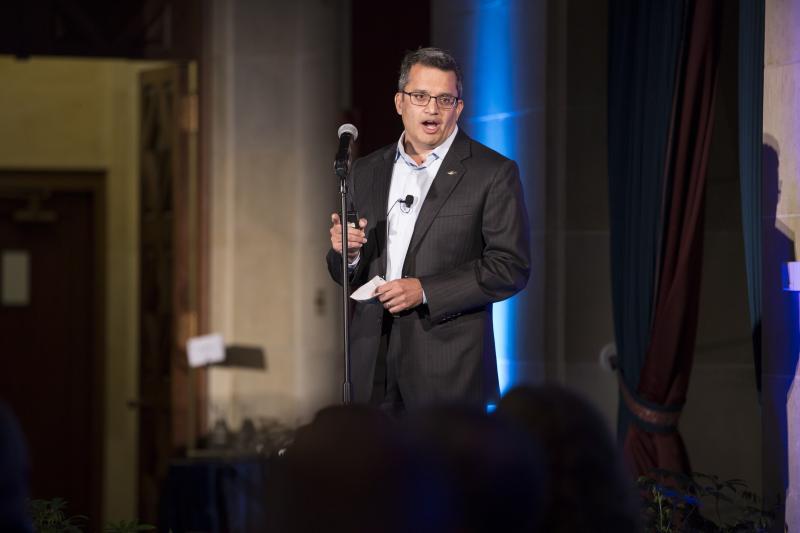 Tweet Facebook
Dow's Snehal Desai issues an appeal for creative thinking when it comes to water and the circular economy.

Water is an area very much in need of disruption. I’m not talking about turning off the faucet to disrupt its flow, but rather reacting to the alarming statistics on water demand. According to McKinsey & Company, global demand for water will exceed viable resources by 40 percent by 2030. And, according to the United Nations, global water demand for manufacturing is anticipated to increase by 400 percent by 2050.

Drastic times call for drastic measures – and we’re already seeing governments make some eye-opening moves around the world. Recently, riots broke out in Venezuela when the government decided that the best way to deal with their drought and save energy was to reduce the work week to two days for the public sector. The Middle East is also struggling. Did you know it’s illegal to grow wheat in the Kingdom of Saudi Arabia because it uses too much water? These policies may seem extreme for those of us living in the U.S.; however, our world is at a critical juncture, and while I don’t support cutting jobs or curbing agriculture, we need to start exploring more creative ways to solve our water challenges.

In the past, many businesses operated under a linear economy model, where we “take, make and dispose” of raw materials. This model would work if we had unlimited resources –alas, we don’t.

If we want to meet the demand for 40 percent more water over the next 14 years, we need to think inside the circle. By this, I mean applying principles of a circular economy to reduce, reuse, renew and, ultimately, close the resources loop.

A circular economy means that materials formerly considered to be “waste” have the potential to be turned into new products for a diverse range of market applications. In a circular economy, renewed water is used for the tap, but also for power generation, agriculture, manufacturing, food and beverage processing and other applications –even your Happy Hour beer!

This circular concept is opening up new possibilities for innovation and collaboration. In fact, the biggest areas of growth for water reuse have come out of tapping new applications, advancing solutions that make it less energy intensive and more affordable and, finally, in the growing collaboration between governments and the public-private sector.

A couple of years ago, we worked with the Orange County Water District to help expand their Groundwater Replenishment System. At the time, the facility purified 70 million gallons of water per day (mgd). But with 850,000 residents and growing, they needed more water. The decision was made to expand the facility to treat 30 more mgd, and now it is the largest “Toilet-to-Tap” facility in the world. We worked with the facility to pilot a series of prototype membranes and monitor performance. After adopting Dow’s reverse osmosis membranes, the facility was able to lower its energy requirement by 13 percent, compared to treating the same amount of water with the existing membranes in the original facility. That energy reduction reduces operating costs and also lowers the entire carbon footprint of the facility. Best of all, Orange County has gained first-rate, drinkable water.

I hope I’m not making it sound too easy – that’s far from the truth. These sort of projects need a lot of collaboration and a lot of buy-in. It’s critical that the solutions we are promoting are realistic and achievable. To make a circular economy more accessible, Dow promotes the concept of Minimal Liquid Discharge (MLD). This was in response to Zero Liquid Discharge, the concept that operations should recover 100 percent of their liquid discharge. Though zero is ideal, achieving it can be costly and carry a higher energy burden. Much of the expense and energy of the process is in recovering that final five percent. MLD, on the other hand, takes a host of factors into consideration, and puts more options in front of our customers based on their operating budgets, waste streams and water requirements. The process facilitates recovery of up to 95 percent of liquid discharges, and helps companies and facilities attain their water footprint goals more easily and effectively.

Getting close to 40 percent more water in the next decade is going to take work. We’re looking at new collaboration models that can help us make improvements – whether it’s an improvement in technology, a process or in valuing natural capital. Bringing together different groups of people, hearing different ideas, expanding our resources – that is what’s going to help us make those next breakthroughs.