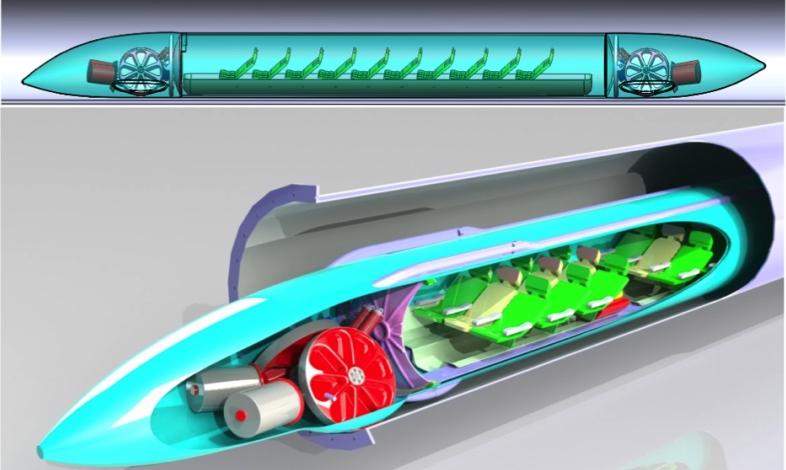 In his biography on Elon Musk, Ashlee Vance claims, “What Musk has developed that so many of the entrepreneurs in Silicon Valley lack is a meaningful worldview. He’s the possessed genius on the grandest quest anyone has ever concocted. He’s less a CEO chasing riches than a general marshaling troops to secure victory.”

In 2013, Elon Musk, the CEO of Tesla Motors and SpaceX, chairman of SolarCity, and co-founder of PayPal wrote a 58-page proposal for a high-speed transportation system between Los Angeles and San Francisco called Hyperloop. Musk’s idea came quickly after California’s announcement that it would build a $68 billion high-speed rail system with a top speed of 220 mph. Musk and others argued that California’s planned “bullet train” was too slow, inconvenient, and expensive per mile, as well as failing to live up to the innovative ethos of Silicon Valley.

The general idea for Hyperloop involves pressurized capsules or pods being pushed through a continuous reduced-pressure steel tube on an air cushion, similar to past pneumatic tube designs, during which linear induction motors and air compressors propel the capsule at great speeds. Hyperloop‘s pods would achieve speeds as fast 800 mph and travel from Los Angeles to San Francisco in as little as 30 minutes, making the commute far faster than commercial air travel or the state’s new rail line. Musk’s brainchild would cost significantly less than the average high-speed rail system, while having no environmental repercussions, as it runs along elevated pylons so the land can still be used, and its solar panels enable the rail to be completely self-powered.

Musk first introduced the Hyperloop as just an idea and was shocked by how quickly other investors, innovators, and engineers have taken it upon themselves to develop the high-speed rail system. The original proposition continues to blossom with private companies and independent research teams vesting more and more interest. Musk and SpaceX have now taken the next step in their ambitions for the Hyperloop by partnering with Texas A&M University to host an open-source design competition for university students and engineering teams to create their own high-speed pods.

SpaceX and Elon Musk have both stated “while we are not affiliated with any hyperloop companies and are not developing a commercial hyperloop ourselves, we are interested in helping to accelerate development of a functional hyperloop prototype.” SpaceX has since partnered with the Dwight Look College of Engineering at Texas A&M University to host a hyperloop design weekend in early January of 2016. Teams will have until September 15th to register for the event and all teams’ final designs must be entered by December 15th. The competition will seek out the best blueprint for a hyperloop transport system, considering not only the speed, but the interior of the capsule, safety features, and other design aspects.

SpaceX’s backing of the competition will include the construction of a one-mile test track nearby their Hawthorne, California, headquarters. The competition is scheduled for the summer of 2016, where the best teams will be able to test their human-scale pods on the California track.

Not long after SpaceX announced the competition, a team of students from the University of Illinois have been acknowledged for the creation of a 1:24 scale hyperloop model that uses electromagnetic motors to push miniature capsules through a metal oval loop. Their prototype scaled up would achieve speeds of 160 mph, but could go faster if friction is minimized from roller bearings, capsules are depressurized, and a track is constructed in a straight line not an oval. Nonetheless, these students have shown that a once profound idea may become reality in the near future.

Musk and SpaceX are not alone in their ambitions to advance the creation of a hyperloop high-speed transportation system, as multiple companies are vying for investment, including the crowdsourced research company, Hyperloop Transport Technologies. Dirk Ahlborn, CEO of Hyperloop Transport Technologies, recently praised SpaceX’s competition, stating, “We believe this recent announcement will excite even more people about the project and amazing solutions will result for commercial integration. We will help support the competition in any way we can.” Another company, Hyperloop Technologies, led by Brogan BamBrogan, a former SpaceX engineer, is focused on developing a “cargoloop” to transport freight around the world, over land or under water at record speeds.

Current trends in the transportation industry do not appear to be slowing down with more innovators, investors, and entrepreneurs looking to change the status quo. High-speed rails may be just a stepping stone for the growth of 21st century transportation. The possibility to commute between Los Angeles and San Francisco or New York and Washington D.C. in 30 minutes or less could completely change the transportation industry, making business and social travel an afterthought in a globalized world.

At the conclusion of a recent interview, Ahlborn stated, “People are afraid of new technologies; we don’t understand it. I think [the hyperloop] will actually do the same thing the rail[road] did to America when it was first introduced in the 1800s. At that time people thought you would die when you go on a train because it goes so fast you couldn’t breathe, so once you build it and people can try it out. I don’t think anything can stop it.”