U.S. Chamber of Commerce Foundation / The Journey from Soldier to Civilian

The Journey from Soldier to Civilian

“Serving in the Army gives you confidence,” said Lt. Col. Eric Warner. Dressed in a gray suit and coordinating silver-blue tie, Warner added, “I’m Joe Public now. It’s challenging to explain who I am and what I do when I’m out of uniform.”

An active duty soldier, Warner currently works in the Strategic Initiatives Department of the U.S. Army Soldier for Life program (SFL). SFL connects Army, government and community efforts that provide education, employment and healthcare resources and opportunities to support soldiers, veterans and their families. He found himself in a unique position at a Hiring Our Heroes Career Fair in Washington, D.C.: he attended as both a member of SFL staff and as a job seeker. 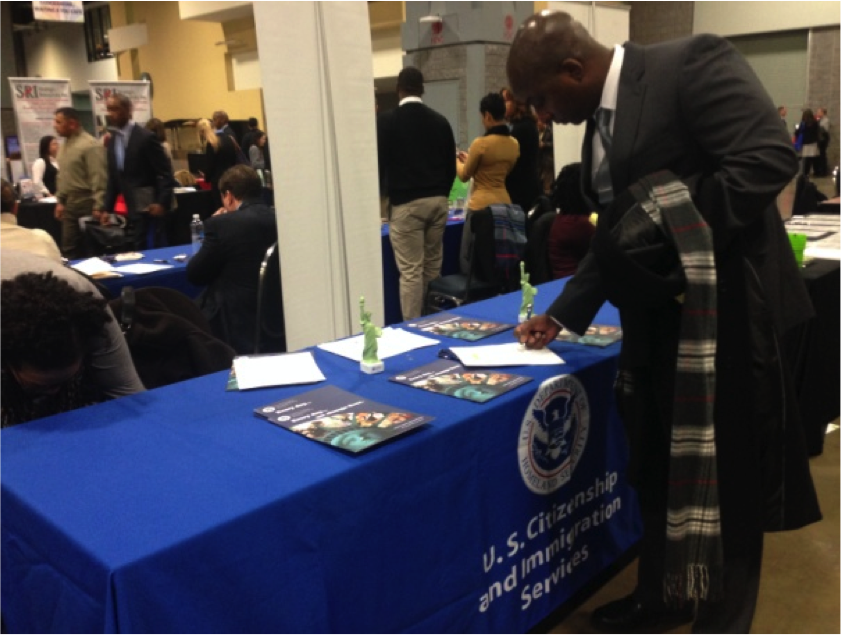 Warner will retire from a 24-year Army career at the end of this year.

“You look back at all your accomplishments and you say ‘I can do this,’” said Warner of finding a civilian job. As he looked around at the hundreds of service members, veterans and employers in attendance, he added, “You also realize it’s not as easy as you thought it would be. You can’t just show up—you’ve got to do your homework and focus your efforts.”

The transition from soldier to civilian can be difficult, especially when it comes to finding a career that fits the individual’s skills and needs. SFL works with Hiring Our Heroes to help translate military skills to civilian jobs, and to connect soldiers, veterans and their families with meaningful employment opportunities. To date, these hiring fairs have led to 369,000 confirmed veteran hires. Hiring Our Heroes does not plan to stop there. Their ultimate goal is to increase that number to 500,000.

“Transition is inevitable,” said Warner. “Whether you serve four years or 24 years, every soldier, veteran and military family will transition one day.”

Inevitable though it may be, many soldiers do not start planning for civilian life until close to their date of retirement or separation. SFL wants to change that. “Meaningful employment in the civilian world enables our soldiers, veterans and their families to remain Army strong even after transition, and to serve as leaders and as contributing members of their communities,” Warner said. By thinking of “Soldier for Life” as a mindset, soldiers, veterans and their families will take the Army values and ethics they live by in the service and apply them as civilians, making their communities better places to live and grow. 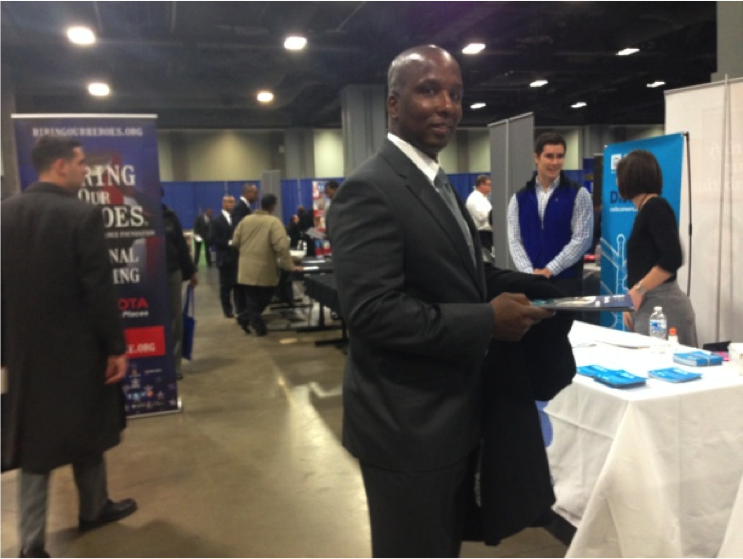 Warner walked from table to table, talking to different employers about opportunities for transitioning or former service members. He was most interested in Department of Homeland Security agencies-- like many soldiers, he wants to work in a profession that allows him to continue to serve. His dream job is to work for the Federal Emergency Management Agency (FEMA), helping the nation to build its capacity to respond to hazards. “The military taught me the power of service and of helping people,” said Warner. “I want to continue that as a civilian.”

In his dual position as SFL staff and transitioning soldier, Warner sees both sides of the system. His advice: “No matter the company, there's probably a job for you. A soldier's leadership skills and ability to solve problems will always be in demand.” His other piece of advice: "start thinking about this early."

To learn more about the Soldier for Life program, visit www.SoldierForLife.Army.mil