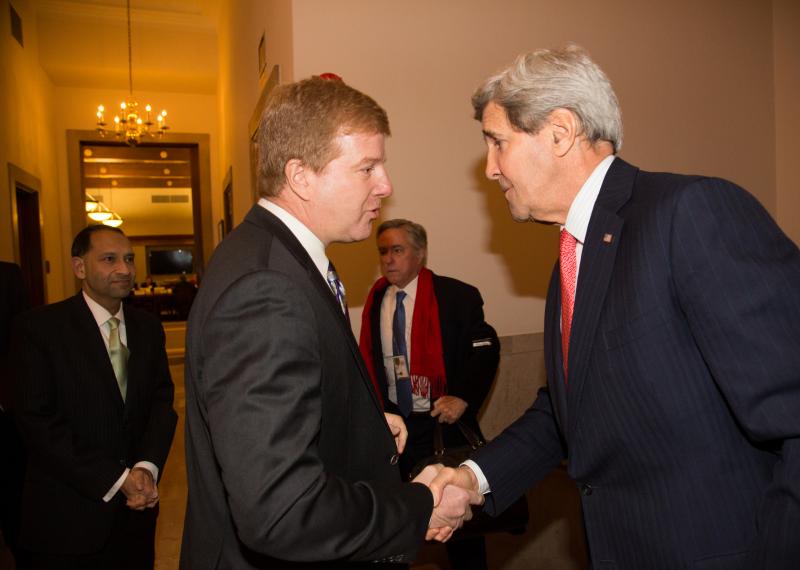 U.S. Secretary of State John Kerry said peace and stability in the Middle East can come through the support of entrepreneurship and free enterprise in the region.

Kerry said that an opening of trade, a reduction in corruption and an investment in infrastructure would help the region blossom as a place for business and economic growth.

Kerry made his remarks on Dec. 8 at a leadership forum hosted by the Middle East Commercial Center (MECC) a business coalition led by the U.S. Chamber of Commerce. Kerry offered the keynote speech during a two-day conference at the Chamber attended by hundreds of business and political leaders from the Middle East and North Africa.

“The ability to be able to advance projects and promote growth that will benefit people throughout the region is absolutely essential to making peace,” Kerry said.

The Secretary acknowledged serious concerns over war and terrorism in the region, but said a growth in business opportunities can play role in bringing peace.

In the 21st century, a nation’s interests are advanced not just by troops and diplomats, but by entrepreneurs and executives,” Kerry said. “And that’s because innovation, investment, and trade are absolutely the fundamental engines of strong economies. Wisely channeled, they lead to shared prosperity, to sustainable growth, and more and better jobs both domestically and overseas.”

Education – Kerry said that colleges in the Middle East must do a better job of preparing young people for the job market.

“In the United States, we have developed a robust system of junior and community colleges, supplemented by hands-on career counseling and direct private sector involvement,” Kerry said. “We ought to help the Middle East to do the same.”

Trade and Transparency – The Secretary of State said Middle Eastern countries must have more liberal trade agreements and integrate themselves better into global supply chains. They must also consistently apply the rule of law.

“Repeatedly we emphasize the value of practices that will attract more foreign direct investment, facilitate intra-regional commerce, and make it easier for local businesses to open their doors and grow,” Kerry said.

Infrastructure – Kerry said roads, ports, and pipelines will be the key to economic progress in the region, along with access to broadband and other communications technologies. He said that despite the region’s historic production of oil, there are opportunities to grow economies by investing in renewable energy sources too.

Reducing Corruption – The Secretary of State called bribery an “opportunity destroyer.” He said corruption costs the global economy trillions of dollars each year, and that it is the world’s responsibility to crack down on abuses.

“Nothing is more demoralizing to any citizen than the belief that the system is rigged against them and that people in positions of authority are – to use the diplomatic term – crooks.”