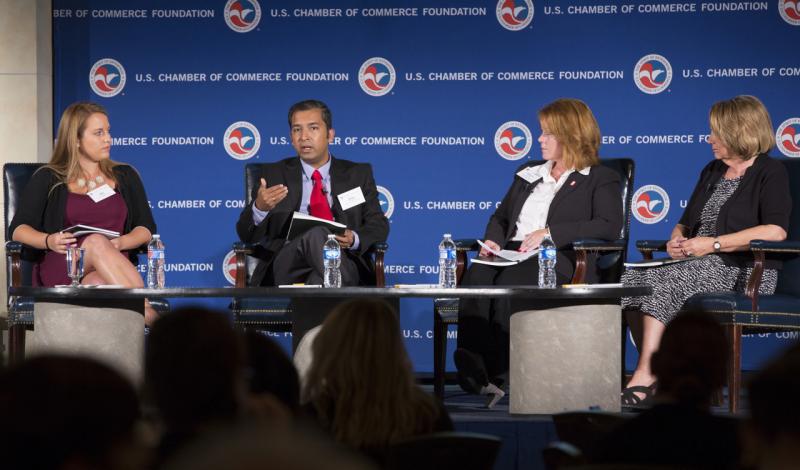 Business leaders said the quality of America’s education system has a direct impact on the nation’s economic competitiveness and that businesses can play a key role in helping students become more prepared for college and careers.

Officials from the U.S. Chamber of Commerce Foundation, American Enterprise Institute (AEI), and several companies gathered on September 11 to discuss the findings of a state-by-state report on K-12 educational effectiveness, and said the results show that the business community needs to have more seats at the table.

“Business has a stake in education—we must have a voice in the debate,” said John R. McKernan, President of the U.S. Chamber of Commerce Foundation and a former governor of Maine. “We are the largest single consumer of our school systems. Without a steady flow of talent, we can’t drive economic growth, propel innovation, advance American competitiveness, or create opportunities for American workers.”

McKernan made his remarks as the Chamber Foundation revealed the results of the latest Leaders & Laggards report, which offers a state-by-state analysis of K-12 education performance and policy. The report is the fourth in a series, and this latest version is an update to the original report published in 2007. [See the Full Report and an interactive map at leadersandlaggards.org.]

The Leaders & Laggards report, produced by researchers at AEI in conjunction with the U.S. Chamber of Commerce Foundation, offers letter grades for states in 11 categories related to education. It shows that there has been progress over the last seven years, but panelists noted that the report issued grades on a bell curve, meaning that even a state receiving a high grade still has room for improvement.

“One of the big takeaways from a report like this is the relativeness of things,” said Cheryl Oldham, Vice President for the Center for Education and Workforce at the U.S. Chamber of Commerce Foundation. “So we give a lot of A’s in terms of academic achievement … but we need to step back and look at how folks are doing in absolute terms, and it really is stark.”

The Report as a Guide

Business leaders said they plan to use the Leaders & Laggards report to push for education improvements in their state, and will share it will other companies who are increasingly in need of workers with specific skills, particularly those in science and technology fields.

“We all have to be STEM majors in many ways,” said Kathy Payne, the Senior Director for Education Leadership with State Farm Insurance. “We don’t have to specialize in that, but we have to be aware of it. From a business perspective, this is information we need to share widely with our networks.”

Balaji Ganapathy, the head of workforce effectiveness for Tata Consultancy Services, said the Leaders & Laggards report should be a springboard for conversation in the business community.

“Reports like Leaders and Laggards get into the granularity of why these metrics are the way they are, and allow the businesses to ask themselves how they can be part of change,” Ganapathy said. “We want to take this report and show it to the states we work with.”

In 2007, the Leaders & Laggards report was critical of Tennessee in many areas of education performance and policy. The most recent version of the report indicates that Tennessee has made considerable progress in academic performance, and state officials said that’s not a coincidence.

“This report allowed us to take action immediately to truly try and be globally competitive,” said Catherine Glover, President and CEO, Tennessee Chamber of Commerce and Industry.

Glover noted that despite Tennessee’s overall progress, it still received some low grades, including an “F” for its use of technology. Those grades will spur more action in the state, she said.

“I can guarantee you there are people rallying and saying ‘what are we going to do next?’”