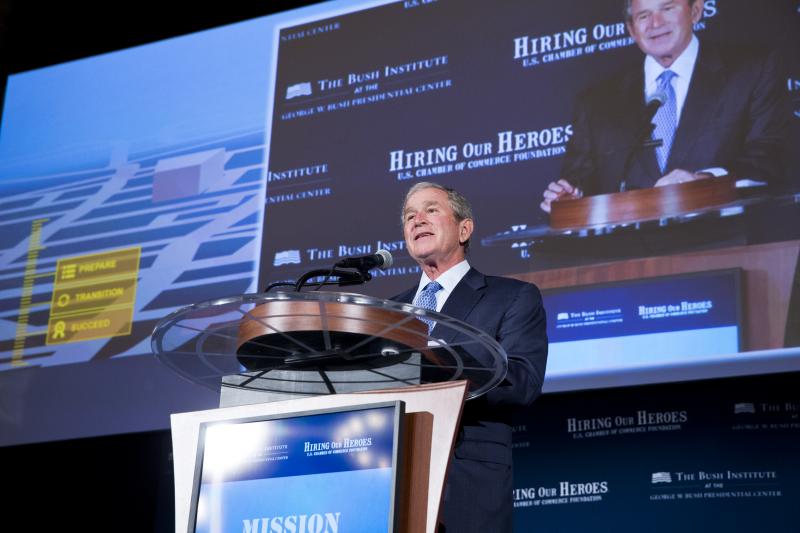 President George W. Bush was among the speakers at "Mission Transition" an event to urge the hiring of more veterans and celebrate the gains made to help post-9/11 veterans.

While tremendous strides have been made in recent years addressing military veteran and spouse employment in the United States, the work is far from over.  A new and clear path is being laid out by the public, private, and non-profit sectors in the post-9/11 veteran and military family employment space, and the way ahead entails an even greater push for awareness and specific calls to action.

That was the message Wednesday during “Mission Transition,” a summit that included remarks from former President of the United States George W. Bush and many other leaders in the government, business, and military communities.

The event, held by the George W. Bush Institute’s Military Service Initiative and the U.S. Chamber of Commerce Foundation’s Hiring Our Heroes, highlighted the progress made in connecting post-9/11 veterans and military spouses with employers and career opportunities. But speakers also emphasized the need to do more, while continuing to emphasize to the audience in attendance of the unique skill sets that military veterans and spouses bring to organizations

“What I've learned is that skills are teachable, but what matters most is the character of the human being, the values, the work ethic, and that sense of personal responsibility," Bush told the assembled crowd. "This is what our veterans bring. This is what all of us in this room are going to help our employers understand."

Wednesday’s event served as a chance to tout the success in connecting employers with service members transitioning out of the military.  Increasingly, businesses have found that veterans, transitioning service members, and their spouses bring unique and valuable work experience, along with their strong sense of duty. 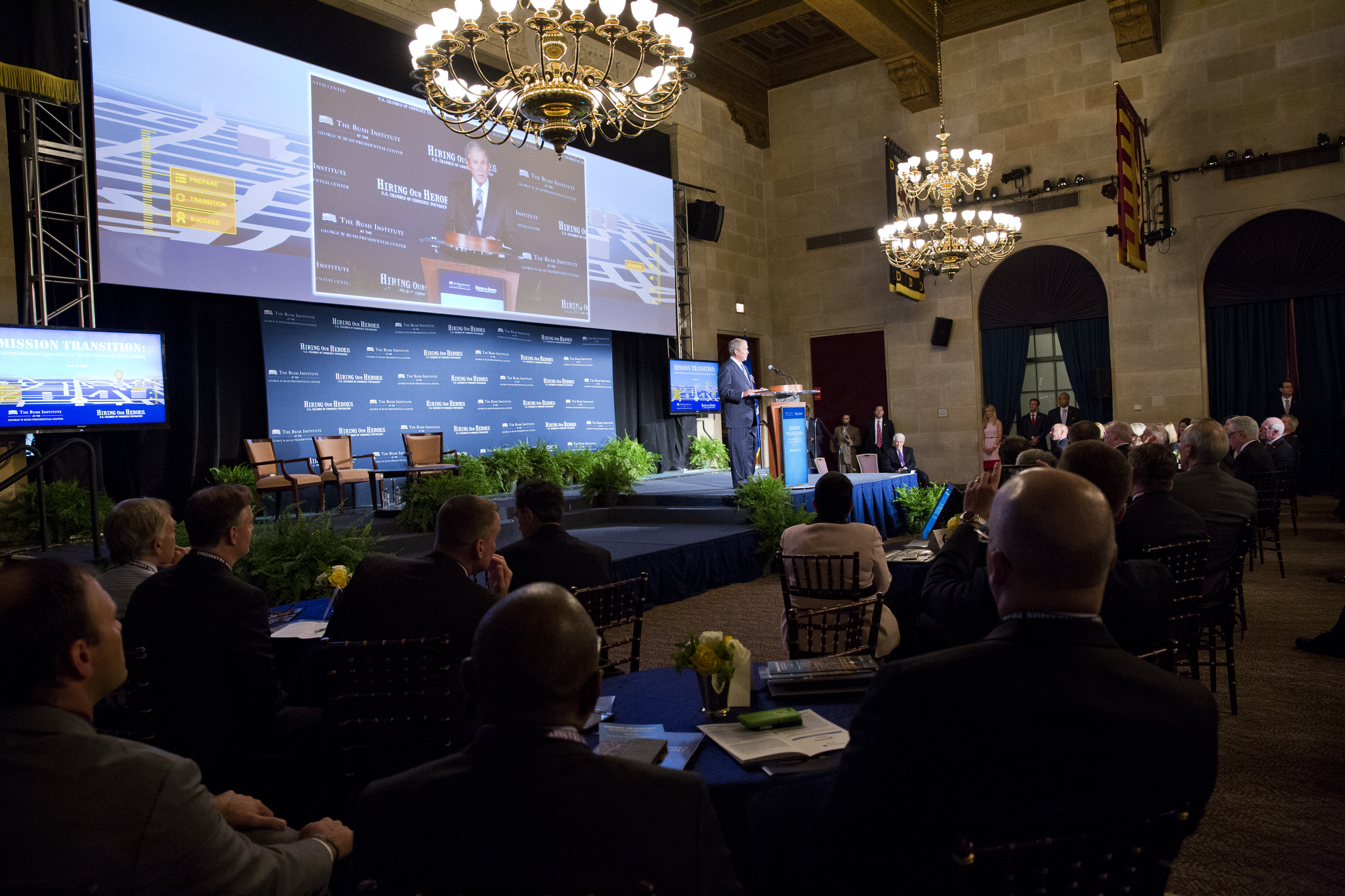 "When a resume says United States military, to me it says you can count on the applicant to be loyal, disciplined, a team player, and a proven leader," Bush said. "Across our country, businesses are recognizing that hiring veterans is not just the right thing to do, but the smart thing to do."

This success has manifested itself with the Hiring 500,000 Heroes campaign, launched in 2012 by Hiring Our Heroes in partnership with Capital One Financial Corporation. Earlier this month, the campaign hit its goal of finding jobs for more than a half-million veterans and military spouses.

This campaign has come alongside the ongoing efforts of Hiring Our Heroes, which has held more than 900 hiring events both in the United States and abroad for veterans and military spouses since March of 2011. Those fairs have directly led to more than 27,200 hires, with hundreds of thousands of others taking advantage of Hiring Our Heroes’ robust digital platforms and resources online..

However, in spite of a great amount of positive news, joblessness among transitioning service members and military spouses remains at a level that is higher than acceptable.

The unemployment rate for all post 9/11 veterans is higher than the national average, and less than one out of every five veterans under the age of 25 is employed.

Meanwhile, approximately 25% of military spouses are without a job.

"We see young, enlisted service members, under the age of 25. Those are the ones facing high unemployment. That is our target population," said Eric Eversole, President of Hiring Our Heroes.

The “Mission Transition” forum stressed the need to continue with a multi-pronged effort to address the unemployment problem.

In addition to hiring events both in the United States and abroad, Hiring Our Heroes has developed a series of tools to connect employers with qualified veterans. These include the Employer Roadmap, which offers advice for employers looking to connect with the military community, and Resume Engine, which helps transitioning service members translate their military experience to civilian employers.

The latest effort, launched Wednesday and unveiled at the summit, is the Veteran Employment Transition Roadmap, a document and website that seeks to clarify the process of moving from the military to civilian workforce. The VET RoadMap brings together a variety of resources from the public, private, and non-profit sector in a streamlined format, both online and in print. Like military operations, the transition to the civilian workforce requires understanding, planning, and deliberate execution. The VET RoadMap consolidates essential steps and offers tools to help veterans take charge of their future.

“There are so many good resources out there” Eversole said. “We wanted our young service members to have a guidebook to point them to the resources across the space."