A New Approach to Community Health 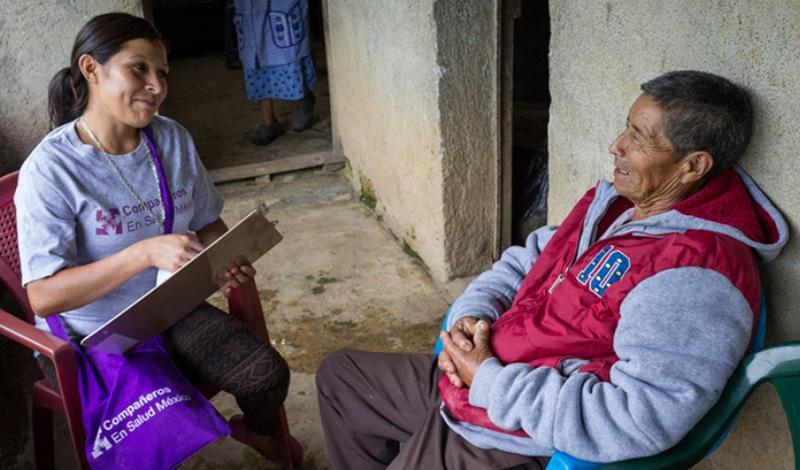 When Adelaida Lopez visits her neighbors, it’s more than a social call.

She might check one neighbor’s blood pressure, and confirm that another is keeping his asthma in check with a working inhaler. On any given day, you could find her talking to a mother about her daughter’s epilepsy, or showing a grandfather of two how to monitor his blood sugar.

Chiapas, Mexico - where Lopez lives – is the poorest state in her country, with three of four residents living below the national poverty line. The communities are isolated, scattered across rainforest-blanketed mountains, and connected only by dirt roads that frequently become impassable during the six-month rainy season.

“They have limited access to electricity, no access to cell phones and little or no access to the internet,” says Dan Palazuelos, M.D., co-founder of the Mexico-based health care nonprofit Compañeros en Salud. “Each individual town is like an island in a sea of rain forest.”

While Lopez takes responsibility for the health of her village, she isn’t a doctor, a nurse or a pharmacist. She’s one of 80 community health workers – all of them women – who are the anchors of a new concept of community health. And she may just be an antidote to the health inequities faced by rural populations.

Giving the Best to the Best

The problem of rural primary care is one global health care nonprofit Partners in Health has always been dedicated to solving. To this end, they launched sister organization Compañeros en Salud  in Mexico in 2011.

“Whether it's addressing maternal death, child survival or management of chronic diseases, we want to make sure Mexico's poorest citizens receive health care that's as good as those who have access to the best resources in Mexico City," says Gary Gottlieb, M.D., Partners in Health’s chief executive officer.

Partners in Health recruits first-year physicians to staff the Compañeros en Salud clinics during their social service year, which the Mexican government requires after graduation from medical school.

The newly minted doctors are supervised and mentored by experienced physicians and professors from Partners in Health, the Brigham and Women’s Hospital in Boston and Harvard Medical School, which improves the quality of care and helps make the rural postings more attractive.

Armed with a crew of energetic, dedicated young physicians and a grant from the AbbVie Foundation, Partners in Health is adding four new clinics to its community health worker program, expanding it from six to 10 villages in the Sierra Madre de Chiapas mountains.

But the “secret sauce” of Compañeros en Salud’s success, Gottlieb says, is the participation of community health workers like Lopez, known locally as acompañantes because they accompany patients on their health care journey.

Community health workers have been around for decades, and were first popularized by the Barefoot Doctors of China - farmers who were given limited medical training and sent back to their rural communities to provide health education and very basic care for their neighbors.

Today, with severe shortages of doctors in many developing countries, community health worker programs typically focus on shifting tasks previously done by doctors or nurses, such as administering vaccinations, to local paraprofessionals.

“We see many community health worker programs run that way today and they're quite successful,” Palazuelos says.

The community health workers have had a remarkable impact, especially around chronic illnesses. At the Compañeros en Saludclinics in Chiapas, 73 percent of hypertensive patients have their blood pressure under control, compared with 50 percent nationally, and 50 percent of diabetes patients have their glucose levels under control, compared with 25 percent nationally.

These are significant statistics, especially when one considers the environmental and social challenges facing the acompañantes of Chiapas.

The Compañeros en Salud team is working on a rigorous clinical study to prove that the presence of community health workers is helping more patients stick to their doctor’s treatment plan, leading to improvements in health. Positive results might help encourage a new approach to community health, one that extends far beyond areas with sub-par access to care.