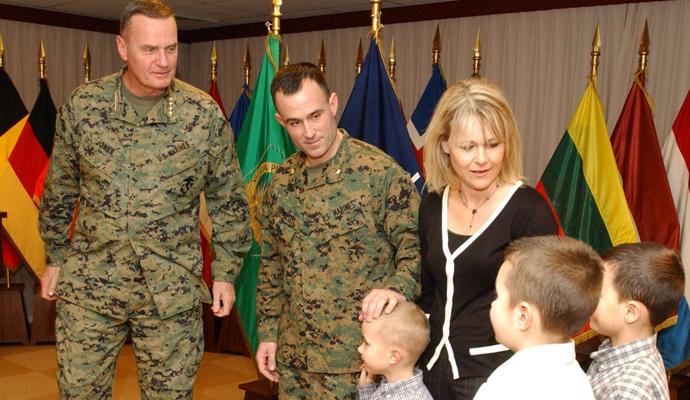 In 2009, I retired from the United States Marine Corps after 20 years of active duty service. My own transition from the military was full of good fortune. I was lucky to have a mentor like former National Security Advisor General Jim Jones, who took a very special interest in my search for a second career. I was lucky to have a network of close friends, who had successfully made their own transitions from the military to the private sector. And I was lucky to be hired by an organization like the U.S. Chamber of Commerce with a President and CEO like Tom Donohue, who understands and appreciates the value of hiring a veteran.

On the heels of celebrating Labor Day, our nation must recognize that many younger veterans are not that fortunate. Last year, the jobless rate for post-9/11 veterans was 50% higher than the national average of 12.1%, and veterans under the age of 25 faced a staggering 29.1% unemployment rate. These data points are even more concerning given that an additional one million service members will be leaving active duty over the next five years.

In light of these challenges, the U.S. Chamber of Commerce and the National Chamber Foundation launched Hiring Our Heroes, a nationwide campaign to help veterans and military spouses find meaningful employment after serving our nation. With an aggressive goal of hosting 500 hiring fairs in its first two years, Hiring Our Heroes is the largest effort of its kind. It was founded on the premise that transitioning military families often pursue career opportunities based on where they want to establish roots, versus what their best job prospects might be.

In close collaboration with a host of government, non-profit, and veteran service organizations, the strength of Hiring Our Heroes has been its ability to forge strong public-private partnerships and positively influence the employment of veterans and military spouses in hundreds of communities across America. Our grassroots efforts have helped 10,000 veterans and military spouses find jobs at more than 200 hiring fairs over a 15-month period starting in March of 2011.

Beyond our efforts to create a movement to address veteran unemployment at the local level, Hiring Our Heroes is launching several initiatives to tackle the systemic issues facing our nation’s veterans before they leave the military and search for a second career. Our focus will be on leveraging the innovation of the private sector to help transitioning service members and veterans in three areas where we believe critical shortfalls exist. That means helping them better prepare for the civilian workforce by 1) creating and promoting their personal brand with prospective employers; 2) establishing a strong network to ease their transitions; and 3) pointing them to the highly skilled and well-paying jobs in America’s 100 fastest growing job markets.

For starters, we are collaborating with the Institute for Veterans and Military Families at Syracuse University and several Fortune 100 companies on a program called "Fast Track." Its goal is simple: to show transitioning service members and veterans where the jobs are, what industries and sectors are hiring, and how to use their educational benefits to gain specific qualifications so they can land one of the two million good paying jobs that President Obama mentioned in his 2012 State of the Union address.

Veterans must also do their part to better market and brand their unique skill sets so they stand out in a tough job market. There are no handouts, and veterans must compete just like they did in uniform. Even with advanced technical skills, leadership experience, unparalleled discipline, and the ability to work well in teams, veterans cannot expect employers—and human resources managers, in particular—to understand their military background without a clear and concise explanation. Personal branding is one of the biggest obstacles facing newer veterans. Few have developed a strong “elevator pitch,” and we have personally witnessed many fail when they stepped in front of employers for the first time at dozens of Hiring Our Heroes fairs across the country. Working with Medal of Honor recipient Dakota Meyer and Toyota, the aim of Hiring Our Heroes’ Personal Branding initiative is to help transitioning service members tell a compelling story about their military service to potential employers and turn their next interview into a job.

Even with the necessary tools to build a personal brand and make an informed decision about employment, veterans must also develop a strong network once they leave the military if they are going to land their dream job. Networking is the connective tissue for any successful career search. Without mentors and a network of friends and associates in the private sector, veterans will enter the civilian workforce blindly and oftentimes will run into a series of dead ends. Given today’s widespread use of social media, there is no shortage of opportunities to build an effective network. Google, Facebook, and LinkedIn can help veterans connect with business professionals from specific industries who have prior military experience and have made difficult transitions themselves.

As we celebrate the role of American workers and the value of their work in our free enterprise economy, let’s not forget the population of Americans who have protected our freedoms. The Chamber’s Hiring Our Heroes program is redoubling its efforts to make a difference in the lives of thousands of veterans and transitioning military families. We do so, not out of charity for our men and women in uniform, but to connect them with employers who will undoubtedly benefit from their incredible work ethic and leadership.

This is the first in a series of blogs by the Executive Director of Hiring Our Heroes, Kevin Schmiegel.  Tune in for his regular reports on the transition challenges facing veterans and military spouses as well as our new initiatives to address obstacles to their employment.